With Fall Guys: Ultimate Knockout’s Season 3.5 Mid-Season update in full swing on Steam and PlayStation, players have been getting to grips with the Blunderdome’s latest mischievous addition: Snowball Survival! We caught up with the Round’s creator extraordinaire, Max Boyle (Junior Game Designer), to talk about the pitching process, the secrets of the snowballs and the Round that (almost) never was... 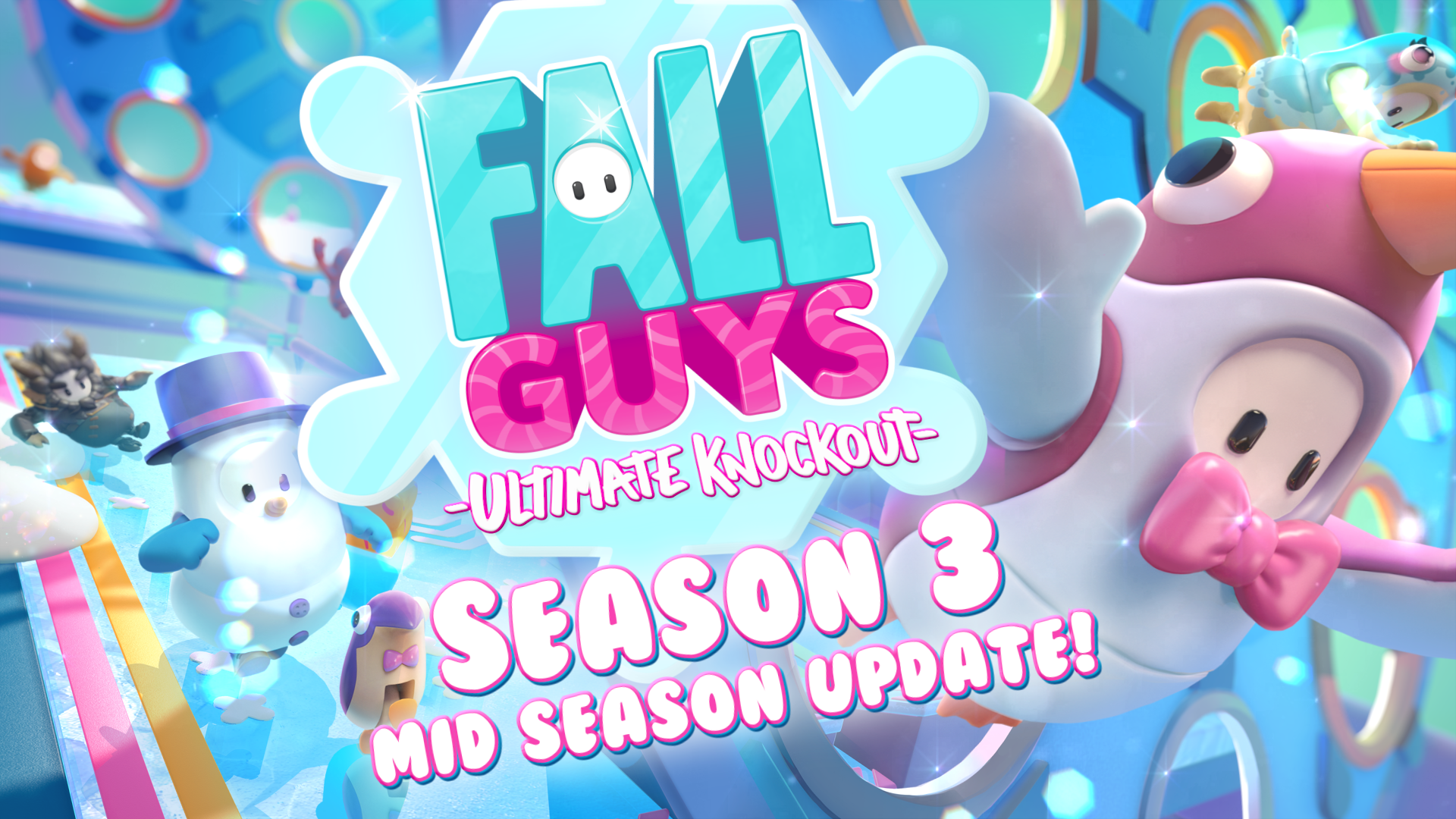 Hey! First up, myself and the fine folk at Mediatonic are hoping you’re all having the best time with our Mid-Season drop and are doing your very best to conquer the chaotic fever dream of Snowball Survival! As the Round’s creator, I wanted to share an overview of how this Round came to be. So, dive in!

Getting that green light - what makes a Fall Guys Round?

Every Fall Guys Round that graces the Blunderdome (and even those that sadly never quite make the cut) go through the same refined process. Lead Game Designer, Joe Walsh (an icon to us all), created what we call our ‘Level Pillars’.

These are a set of ideals that we strive to hit for every Round we create and Snowball Survival was no different! So, here’s the secret ingredients that make up a Fall Guys Round... 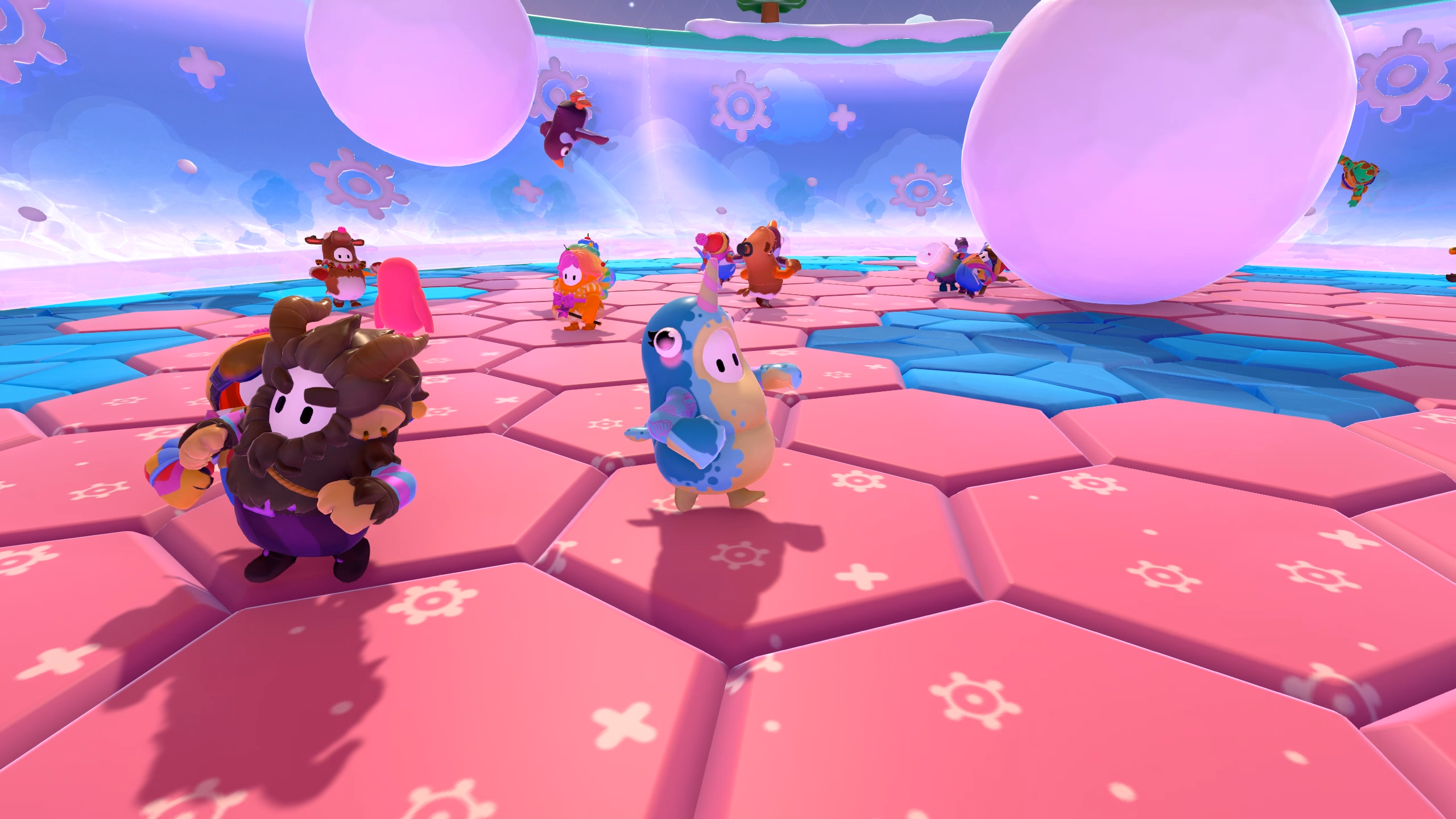 When we initially pitch a new Round to the team, we always try to meet every single one of these criteria. And if they don’t at first? Well, then we keep refining until they do or they simply won’t make the cut!

Next time you think about a Round you’d love to see in the Blunderdome, see how they match up. Who knows, maybe you have a genius idea on your hands!

In the case of Snowball Survival, I was brainstorming with the team, exploring a basic concept of Fall Guys avoiding giant snowballs. How could we approach that? How could we make that particularly fun?

Once we had a rough idea in mind, the next step was articulating that into a pitch. This is essentially a design document that lays out the core concept of the Round in a succinct, easy-to-digest way so it can be discussed by the rest of the team. It lays out the key themes and objectives; how players would qualify or be eliminated, the obstacles involved...all that good stuff!

Excitingly, the team really liked the idea of a bowl with treacherous snowballs for players to avoid, so they approved Snowball Survival for development! The only key change was the addition of the breakaway floor that you see in the game today. 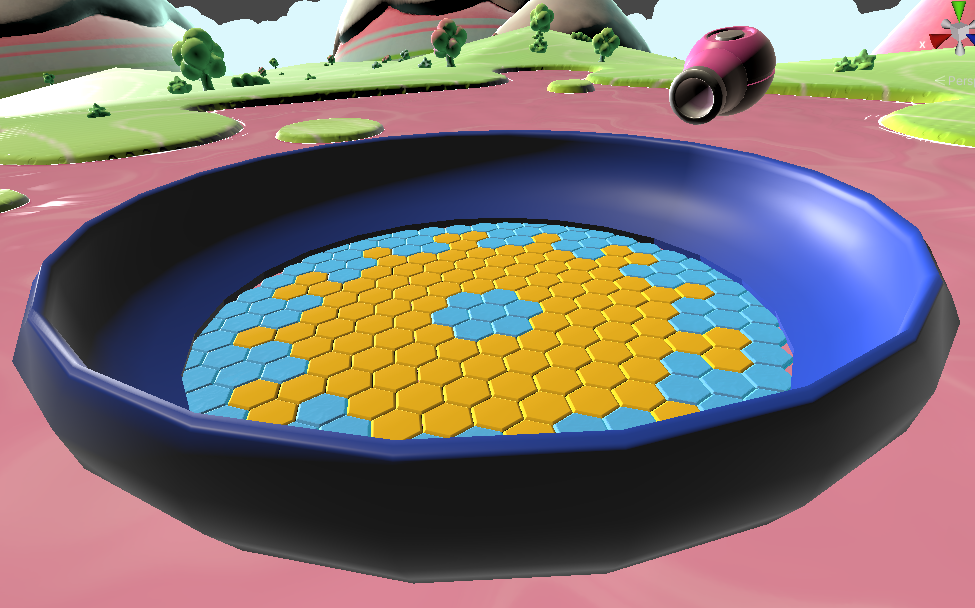 Getting it made - from concept to creation

Fortunately, Snowball Survival’s geometry wasn’t especially complicated (well, as Fall Guys Rounds go anyway...) We already knew we’d need a bowl-like setting to allow our snowballs to roll through the level at a pleasing momentum and platforms for players to slowly breakaway, revealing the slime below.

So, myself and an engineering team mate (hi Ross!), worked on getting an initial prototype built. This included the key building blocks of Snowball Survival, with the consistently rolling snowballs and a basic floor with holes in, representing the gaps that would be left by the falling platforms.

As you can see, the essence of the bowl changed very little over the course of production, aside from some minor tweaks.

However, the snowballs themselves proved to be a bit of an issue. We knew that we wanted them to be constantly rolling around the arena, but physics had other ideas!

You see, when a rollable object wants to roll through a bowl, it will naturally fall into a cycle of just moving around the sides. That may be accurate, but it wouldn’t make for a fun time for players. We felt one solution could be applying some force to the snowball from the other direction, which would get it rolling towards the centre of the bowl and causing plenty of havoc. However, that just meant we ended up with this...

A very speedy, and far too predictable, snowball. Yawn.

We needed to find the correct balance of artificial force and natural rolling. The snowballs’ path should be readable so that players could tactically react—if they were rampaging around unpredictably, it would feel way too unfair!

Throw into the mix that we’re trying to prevent any deliberate ‘push’ we give to the snowball looking too obvious. In context, this would end up looking really weird.

Figuring this out took time. Lots of time.

Between the engineering time required to enable me to play with different values on the snowball and actually finding and tweaking them while testing every iteration we dreamt up, we had our work cut out.

Weeks passed and there was genuinely a point where the team felt that perhaps finding that elusive sweet spot between too hard and too easy was simply taking up too much production time. It looked increasingly like Snowball Survival, as we knew it, could be cut altogether.

Filled with determination, we decided to give it just one more shot.

After some final tweaking to get the snowballs trending towards the centre of the arena without feeling unnatural or predictable, we saw the responses in our playtests shoot up dramatically.

We were super excited! But of course, our work on Snowball Survival didn’t exist in isolation. From the outside, you could be forgiven for thinking that we’re just focusing on one Round at a time, but bringing multiple new Rounds to each Season means we’ll always be working on a diverse range simultaneously.

Once the snowballs were finalised, we knew we could get a complementary floor pattern in place to make things complete. After a few rounds of testing, we settled on the pattern you see today! 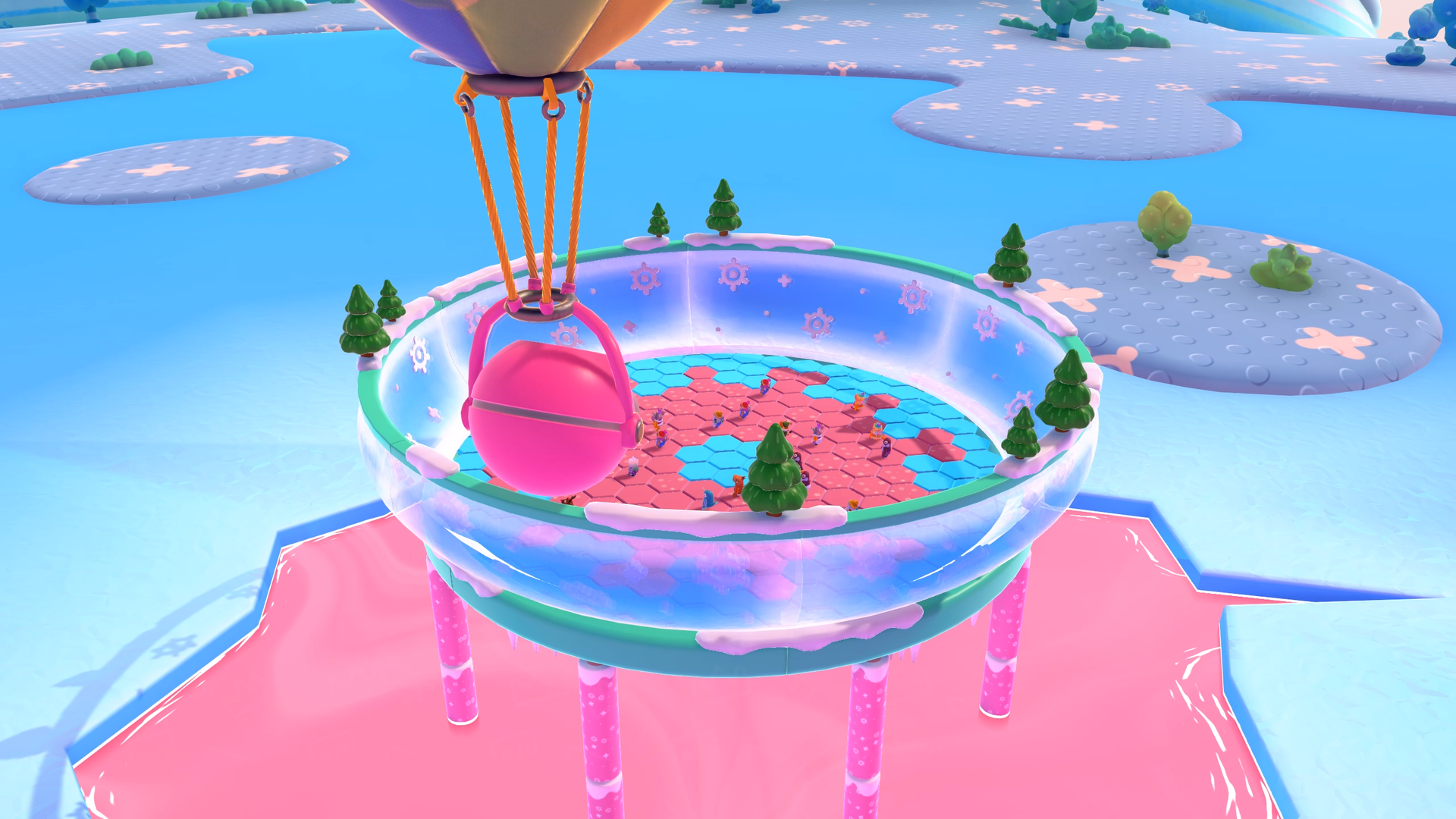 A Round of reflection

So as you can see, Rounds in Fall guys are almost never straight forward! The Rounds you eventually see in-game have gone through all kinds of iterations before they’re judged to be ready for the Blunderdome. As is the way with game development, there are all sorts of mechanics and wild ideas that myself and the team would love to implement, though in practice, many simply don’t play nearly as well as we’d all hope. Or indeed, come with unforeseen hurdles that just don’t match up with the kind of experience we feel our players deserve.

But every time we play a new Round, just like you, we are extremely excited and hopeful! We only want to give you the best Rounds we possibly can and we rigorously test and iterate each one to make sure it meets those core ‘Level Pillars’ we’ve put in place.

I hope you enjoyed this look into the development of Snowball Survival, and I look forward to seeing you all in the Blunderdome real soon! Who knows, maybe it’ll be me pushing you off those ice tiles in Snowball Survival..? 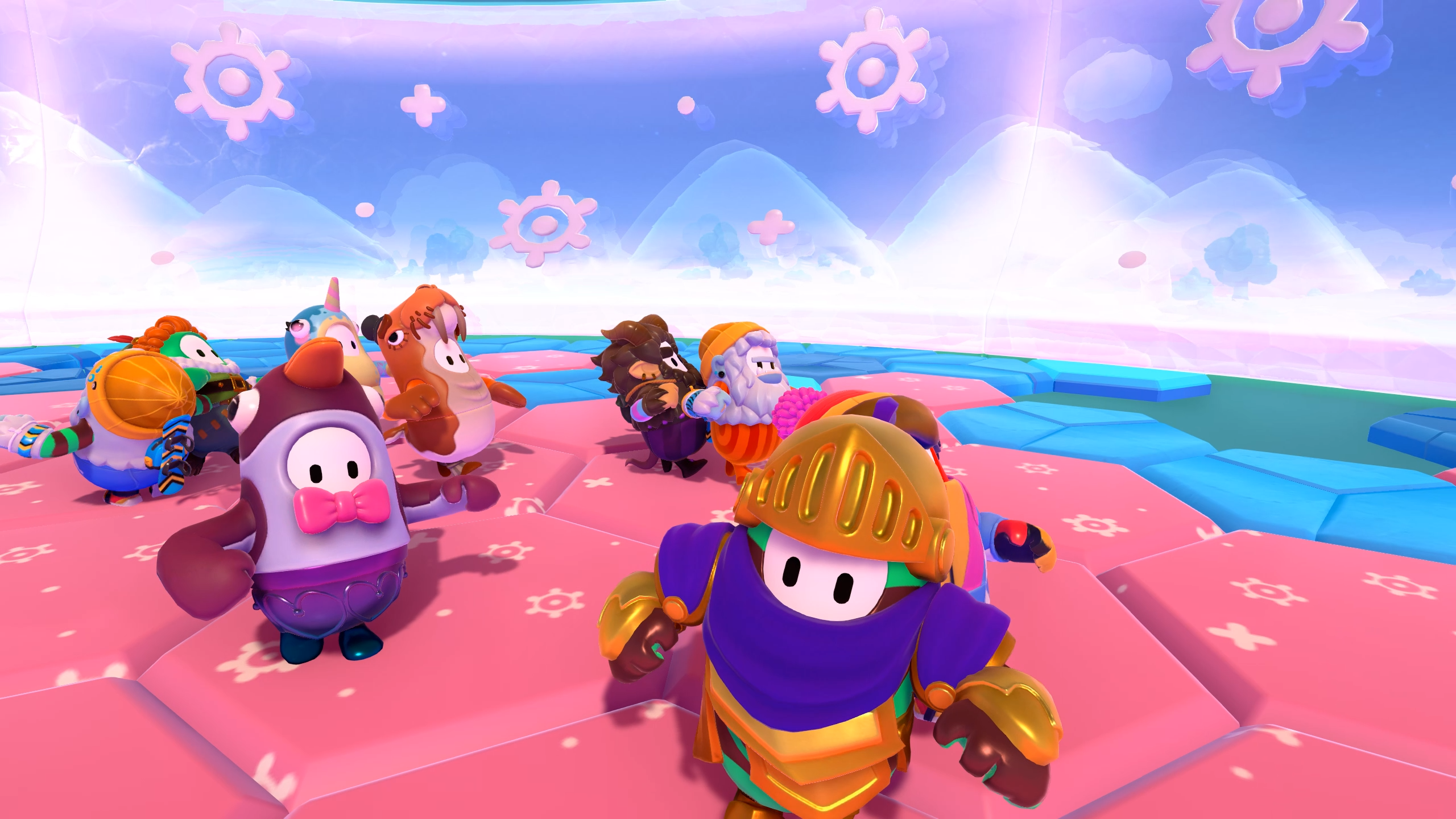 Fall Guys’ latest Mid-Season Update is now live on Steam and PlayStation, so dive in now! We’d love to hear what you think, so stumble on down to the official Discord server to chat with fellow bean fans. Plus, you can always nab the spiciest Fall Guys content on our Twitter, TikTok and Instagram.