After the release of Murder by Numbers, I've been feeling rather reminiscent about my time working on the game and the challenges that lead to my first released title as a designer.

Making nonograms is a lot harder than I thought it would be, even as an avid fan of the puzzle genre. I’m sure I'm not alone in this, but I have been that person to scoff at how these puzzles look NOTHING like the object they are meant to be. So, when I got the opportunity to make my own puzzles, I was so certain that I could do better.

Don’t worry, everyone who sat near me while I was making these puzzles immediately brought me back down to reality.

‘Pixel art’ puzzle is not an entirely accurate name for them. That was the first lesson I had to learn, and it sure caused a lot of frustration. Every time I was happy with the ‘pixel art’ I had created—I would go to test it and it wouldn’t work. Thankfully, the game editor had an easy way to check for validity of a puzzle, because it would only allow the puzzle to have one solution, otherwise it would be impossible to complete.

Anything symmetrical would create a vast amount of solutions, so you had to zoom in on an object, create a shadow, or show an unusual angle in order to bypass this constraint.

Luckily, I also got to finalise the colour versions of the finished puzzles, which definitely helped to ‘sell’ the visuals. 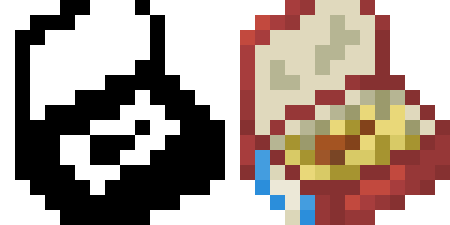 I can almost taste the Friday night regret

Weaving the narrative and the puzzles together produced its own challenges. It turns out that the type of objects that would be typically used as evidence don’t really make for interesting puzzles (so many pieces of paper). There were also some objects on the list where I despaired just reading the name—how on earth was I going to make that?! There are some wonderfully bizarre objects that I can't wait for people to discover.

Of course there was also the ONE TIME I accidentally made something phallic, and never lived it down (a process each and every game designer will go through at some point).

What I'd like to leave you with is this: if you have a passion for something and you are willing to learn, then you can teach yourself how to do just about anything—especially within the realm of game design. Each different title comes with its own unique mechanics and restraints, and so game development is and endless space to learn.

I never thought I would be creating this style of puzzle for a game, in fact I had no idea even how to before I started. It was incredibly enjoyable to try and figure out exactly what makes a good nonogram-stye puzzle, and I hope everyone enjoys uncovering them as they work their way through the game!

Interested to know more behind the scenes info about Murder by Numbers? Be sure to check out the Discord!