Today marks the release of Season 4.5, our major Mid-Season Update that brings heaps of new content to the Blunderdome. Tumble in for some lovingly enhanced futuristic Fall Guys action, including:

You can dive in right now or check out the full list in our Release Notes. Otherwise, stick with us for all the juicy details. Run the trailer! 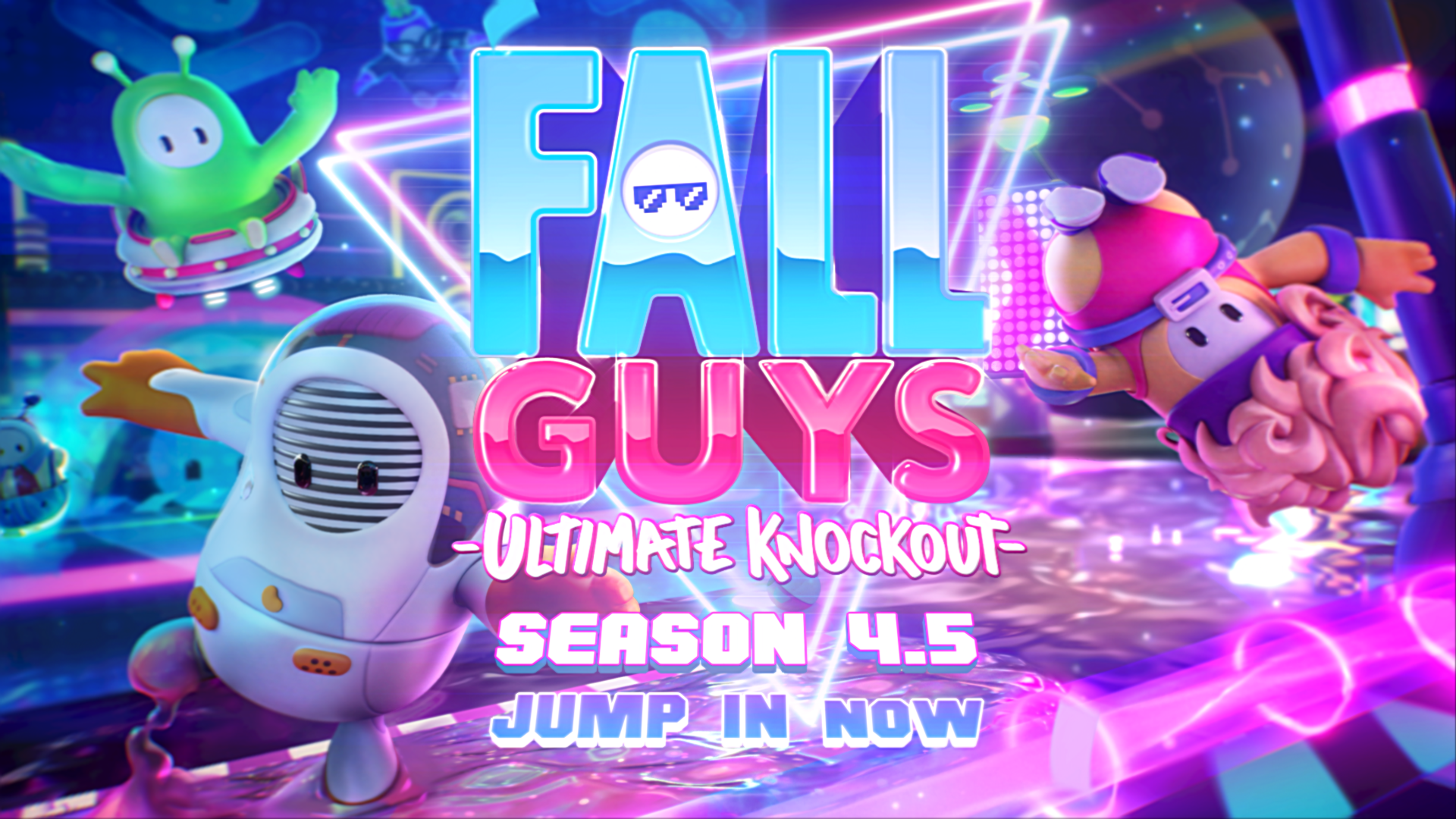 Your pals in the Blunderdome Construction Crew have delved deep into their imagination to deliver two funky fresh Rounds. Come meet the new hotness… 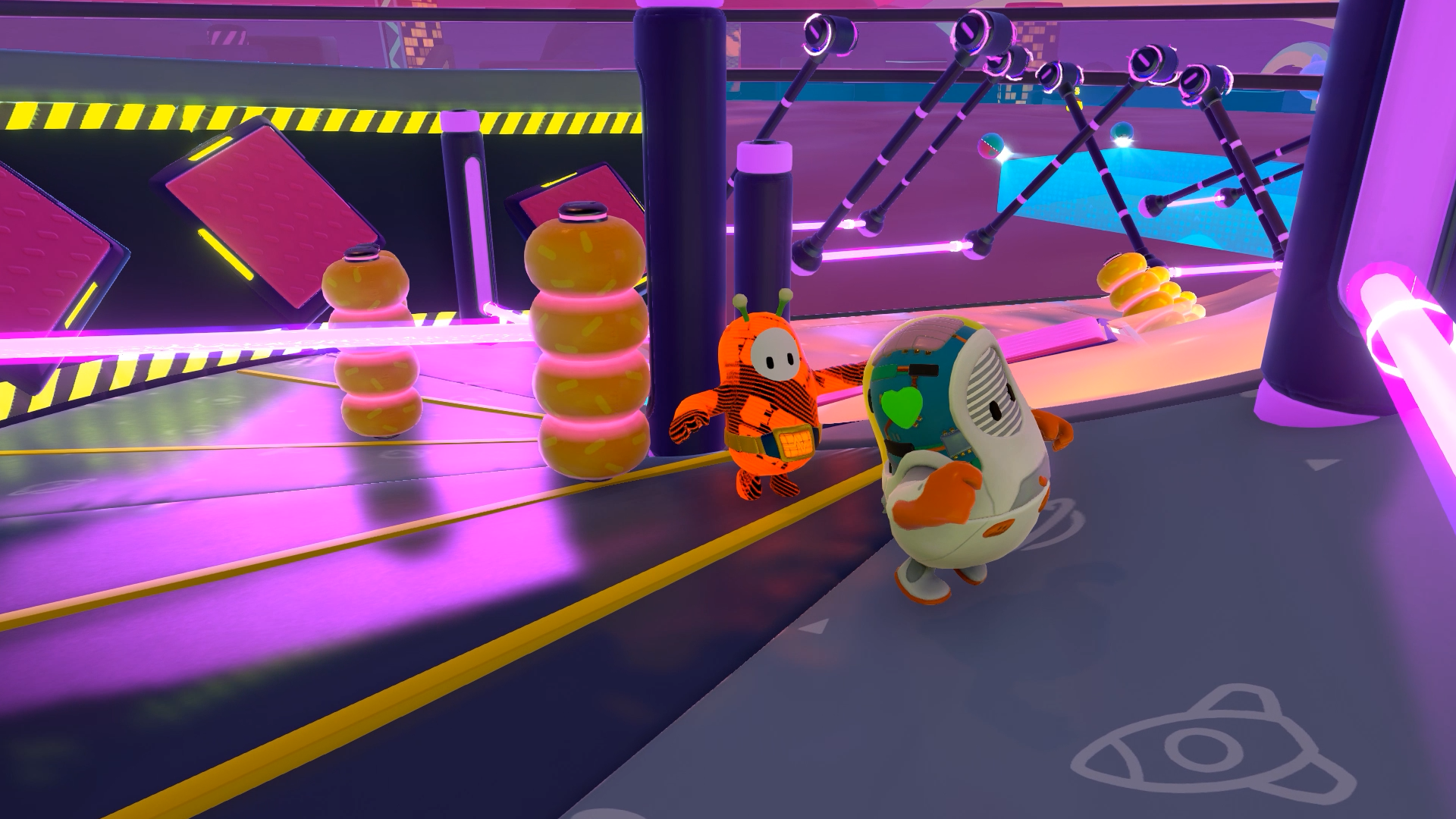 Bing! This elevator is officially out of service! To reach the summit, intrepid beans will have to outrun the slime and master multiple floors of mayhem in this spiritual successor to Slime Climb.

The Slimescraper snakes its way through a frankly ridiculous amount of obstacles that are ripe for short-cut strats, featuring Laser Swings, Conveyor Belts and the all-new Rotating Blades (think Big Fans but...extra silly). Plus, plenty more intricately crafted devices to send you spinning to an early slime bath.Reach the end and prepare for some multi-bean multi-ball, with a top floor of pinball flippers that breach all known safety regulations. Those Bounce Poles may help in a pinch, but touch the slime and you’re outta there. 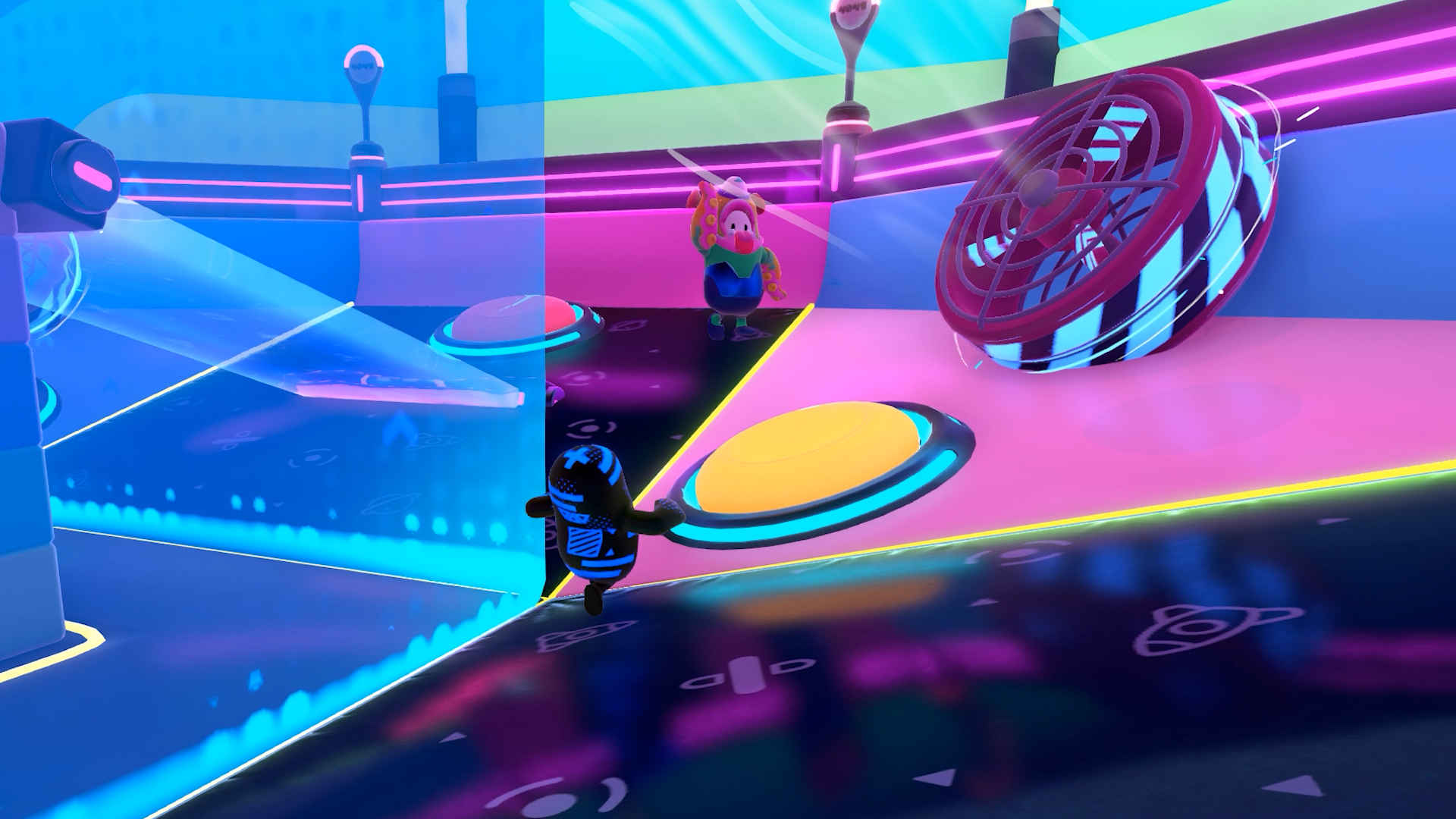 Confronted with 7 buttons, it’s fastest fingers first with beans rampaging to get to the lit platform before their opponent. First contact grabs you a point...but also kicks off an extra spicy effect! Maybe gravity decides to take a break? Perhaps our old friend the Fan fancies an inconvenient visit? It’s on you to ride it out.

Most points at the end of the timer wins, with qualification to the victor. End up in a stalemate and it’s overtime!

Custom Lobbies for all!

Season 4 saw the early access roll out of Private Lobbies, enabling select players the chance to host lobbies with beans of their choice. The team has long been exploring how to make this bigger, better and open to more players—so we are absolutely delighted to share a new and improved version for all Blunderdome denizens! It’s time to meet ‘Custom Lobbies’...and everyone’s invited! 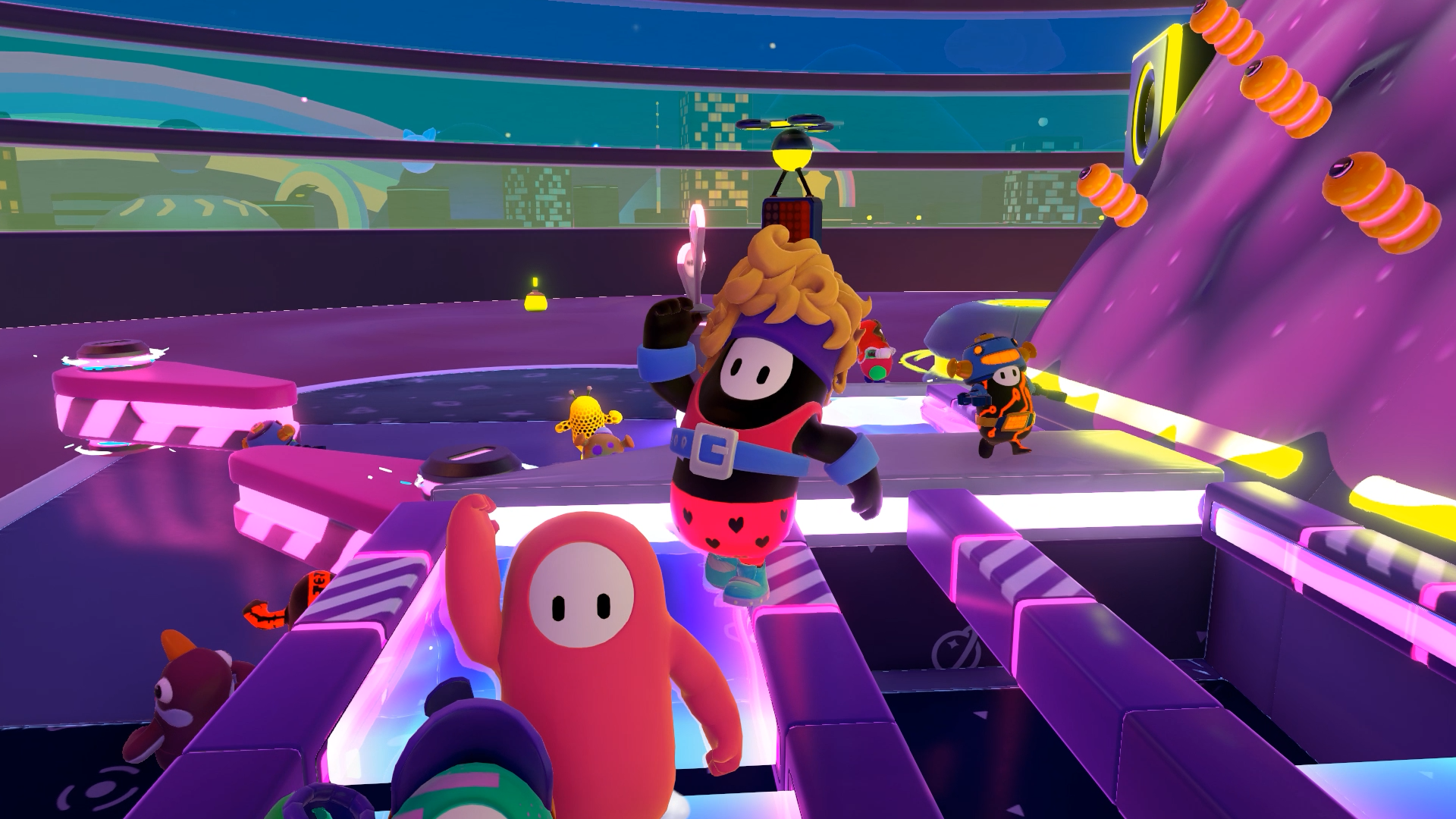 Custom Lobbies enable any player to host their own invitation-only Fall Guys match-up! Up to 60 players can join via a unique code—and with crossplay supported, your pals can dive in regardless of platform. If you’re streaming, why not get chat involved? Chat’s great at Fall Guys.

And if you’re a little more selective about who you stumble with, that’s cool too. Custom Lobbies with as few as four players can still take on Shows!

We’ll be keeping a keen eye on community feedback to make it the best it possibly can be, so we can’t wait to hear what you think! 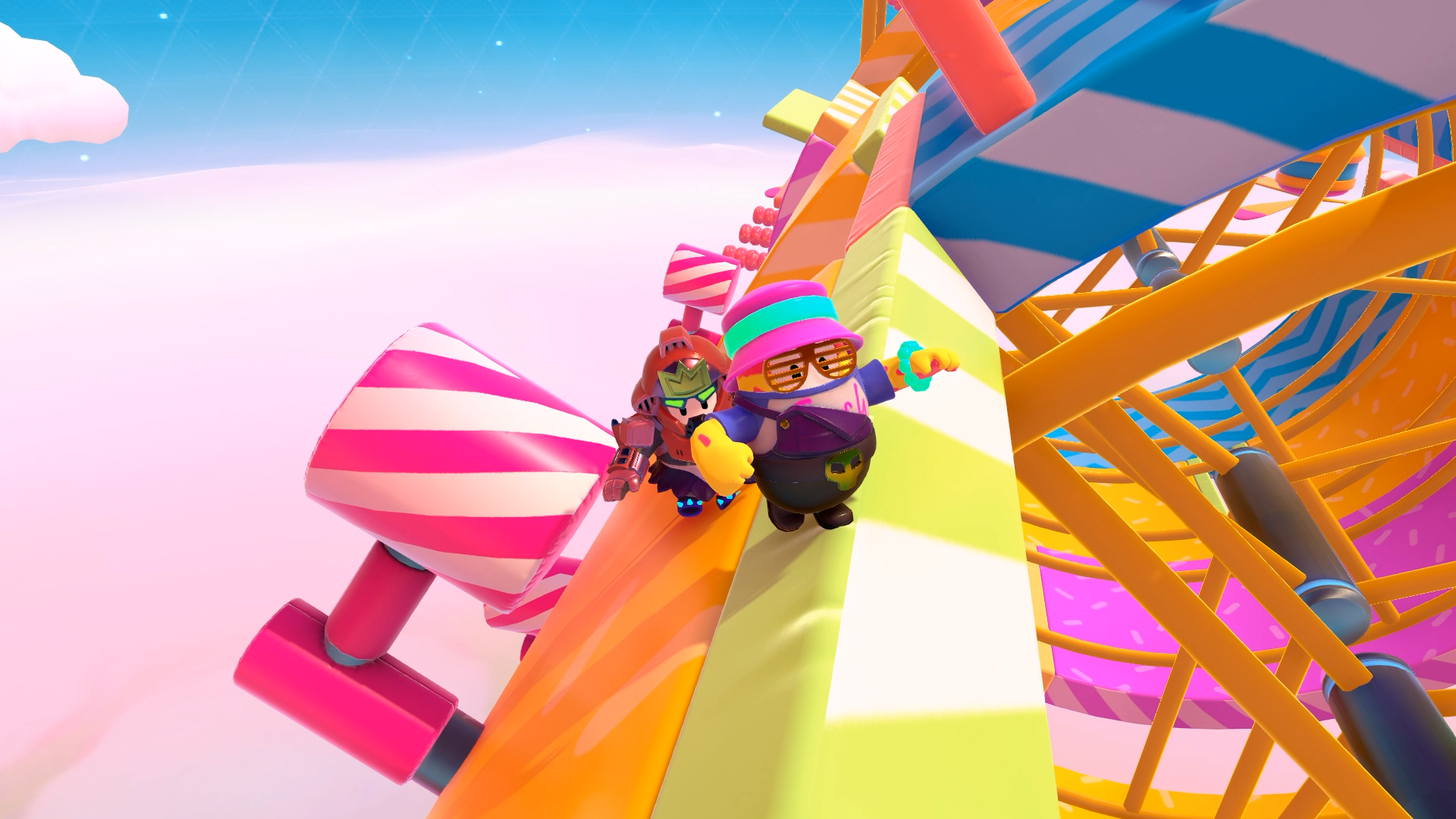 So. Many. Round. Variations.

It wouldn’t be a Mid-Season Update without a wild selection of Round variations and rest assured, the team have concocted some ludicrous additions to your favourites.

Appearing when you least expect it, you’ll be spotting some mighty Round remixes, including Thicc Bonkus gatecrashing Short Circuit, Low Gravity Zones causing havoc in Hoverboard Heroes and Boxing Gloves packing an unexpected punch in Ski Fall. There’s absolutely loads more but we’re not going to spoil them here...dive in and find them all! 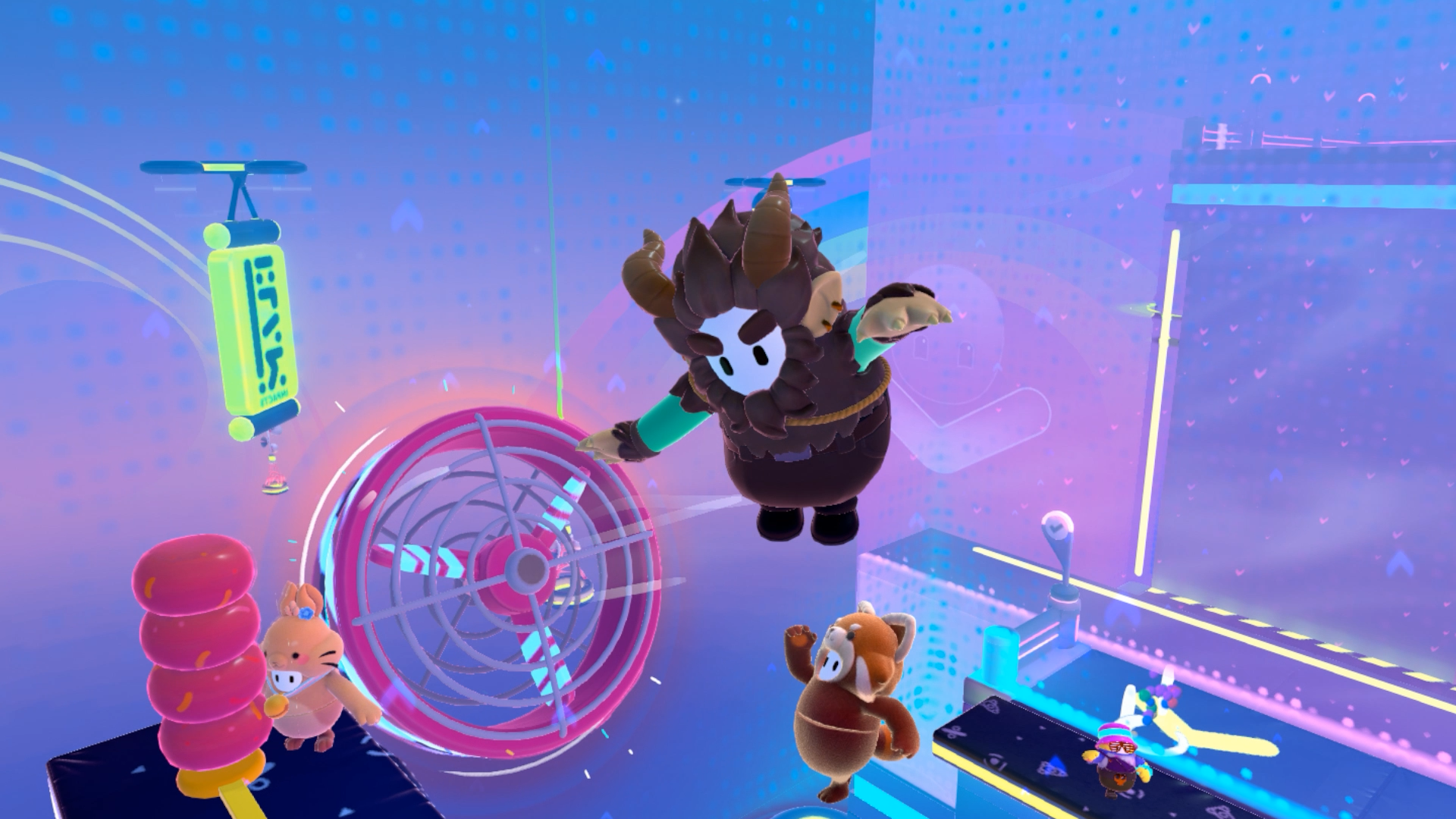 You can also keep an eye on our ongoing work via the Fall Guys Public Issue Tracker.

As always, none of this would be possible without the passion and openness of our wonderful Fall Guys community, so a huge thank you for your Season 4 feedback so far. Keep it coming!

Fall Guys: Ultimate Knockout Season 4.5 is available to play right now on PlayStation and Steam. You can keep to date with all the Fall Guys happenings via our official social media channels, including Twitter, Instagram and TikTok. You can also dive into our official Discord server and sign-up for bean updates straight to your inbox with our Newsletter.

There are additional versions of this blog available!