Wow! Our team at Mediatonic are celebrating our 15th anniversary milestone and as it’s not possible to celebrate in person this year, we’d like to invite you to celebrate with us!

We’ve decided to reflect on our wildest year yet in a nostalgic video, featuring key moments in our history and plenty of hilariously questionable fashion choices for your entertainment (remember when jeans covered your whole shoes and then some..?). 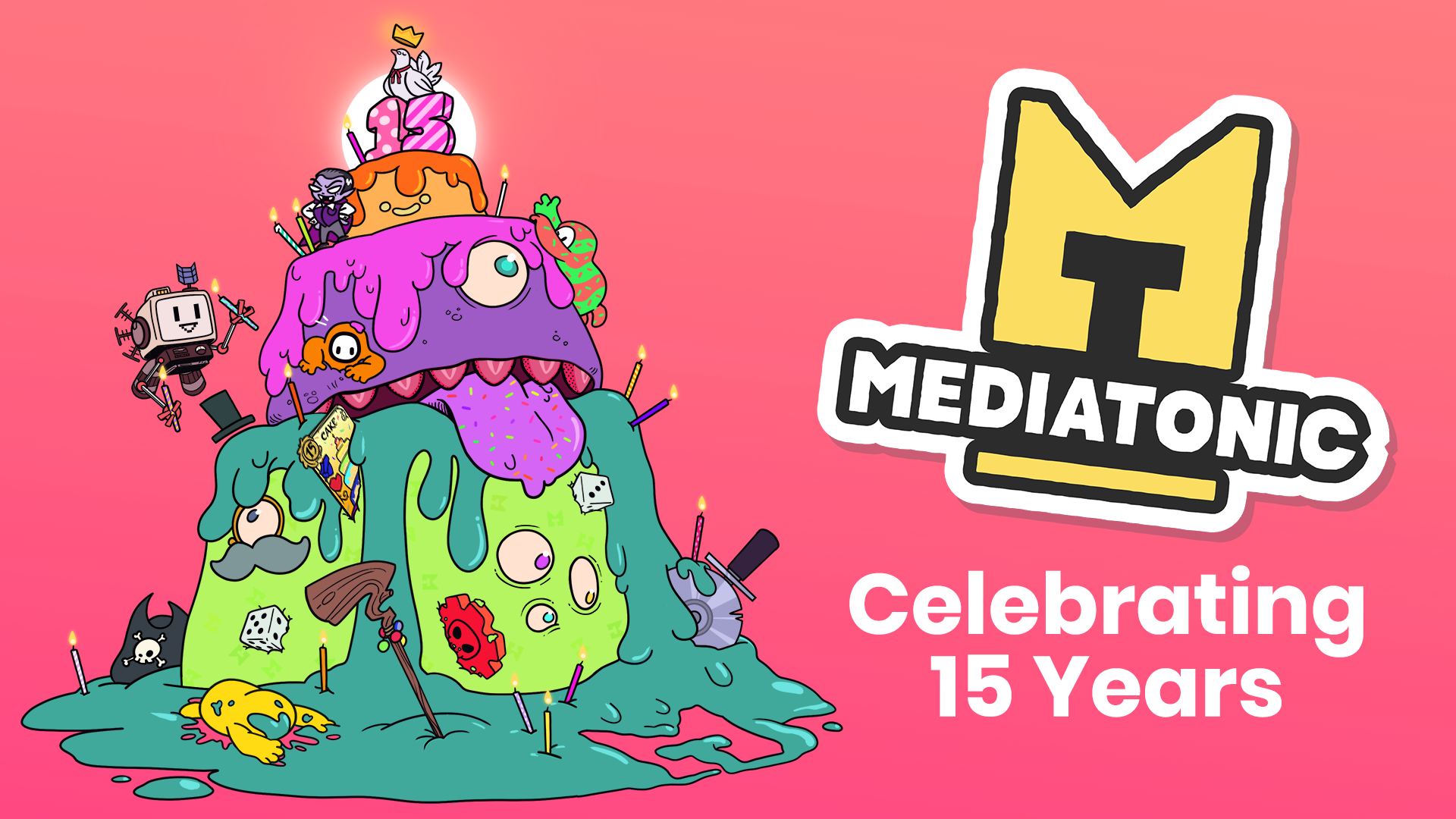 Considering our journey from two Co-Founders, Dave Bailey and Paul Croft, dodging university lectures to create viral flash games in 2005 (nerds), to a contemporary world where 271 teammates conjure up gaming experiences under the Mediatonic banner across London, Brighton, Madrid and now Leamington, it’s nice to pause and contemplate...how on earth did we get here? Hopefully, this special anniversary video gets us all a little bit closer to the answer!

So, how about now? Well, after overcoming the unique challenge of launching Fall Guys: Ultimate Knockout in 2020, our entire Mediatonic team were delighted to pause and fit in some studio-wide birthday festivities last week (of course, we opted to play BINGO on Zoom with drag queen supreme, Kate Butch) and reflect on the game’s unimaginable trajectory in the context of 15 years of learning how to make video games. 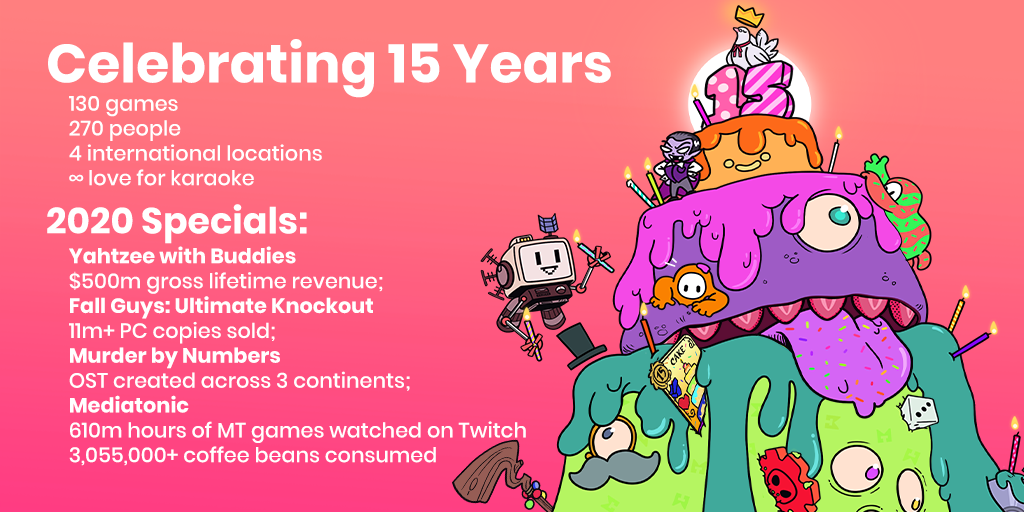 This year, Fall Guys: Ultimate Knockout has sold more than 11 million copies on PC and become the most downloaded PlayStation Plus game of all time, racking up four Game Awards nominations in the process (our fingers are firmly crossed!).

But beyond the numbers, 2020 has been a year of enriching and frankly, rather surreal moments. Having ESPN create an actual documentary about TimTheTatMan’s journey to his first Fall Guys crown celebrates a bonafide internet sensation. Mobile title Yahtzee with Buddies has grossed an unimaginable half a billion dollars to date. Murder by Numbers sashayed onto multiple platforms and many a ‘Best Games of 2020’ list. Brands’ hunger for appearing in Fall Guys was leveraged with the ‘Battle of the Brands’, leading to an eye-watering $1 million donation for the wonderful work of Special Effect. Our team even (poorly) dressed up as Geese, Godzilla and Sonic for IP collaborations we’d previously only dreamed of. It has been quite the year.

On the business side, Mediatonic sits at the heart of the recently formed Tonic Games Group family—now over 300 people strong, with 68 new hires in 2020 for Mediatonic alone. We were incredibly humbled to receive the ‘Best Studio’ accolade at the Develop:Star Awards, an honour that meant so much to us as we try to negotiate rapid growth with a close eye on sustainability and nurturing a positive, supportive company culture. This year has also been significant for welcoming top tier talent and ambitious new faces alike to help us continue our journey creating thought-provoking, creative and above-all fun gaming experiences. And of course, we’d love for you to join us! It’s our hope our games make the world just a little brighter. 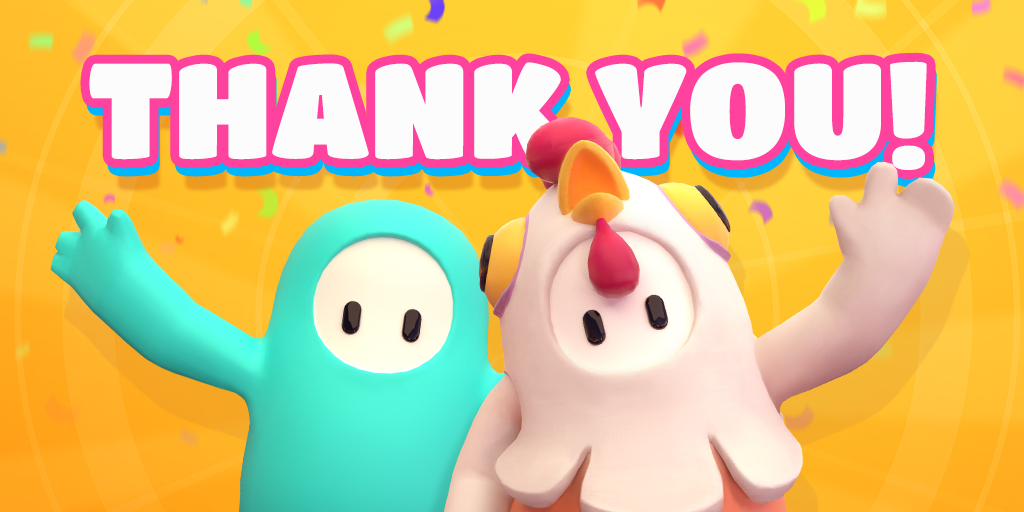 Fundamentally, we just want to say thank you. To our wonderful, hard-working and ever-growing team and to everyone who has taken the time to experience, write about, or share the games we create. We literally wouldn’t be here without you and we can’t wait to show you what’s next. You can keep an eye out by following us on Twitter, LinkedIn and YouTube!