With a dream and the help of some of the Mediatonic crew, we decided on a plan for the first ever Mediatonic FIFA Champions League. There were 24 people who wanted to participate over all, so we had to be creative with the league structure.

After we finagled the general structure of the league, we needed to complete a Champions League draw.

I placed all 24 names and 24 Champions league teams into their own individual see through ball, and separate pots (just like the real Uefa Champions League! It’s important to be official for these things).

Gerald, one of the senior producers, was our trusted special guest to conduct the draw. Each person's pick would be their acquired team for the entire league. Not all results were cause for celebration.

A chorus of boos and general anger erupted when I, the league organiser, managed to pull out Paris Saint-Germain, one of the strongest teams in the league. I swear it was not fixed!

The league itself was an amazing collection of shock results, crazy goals and unpredictable outcomes, with 71 games played over 7 weeks, it was a spectacle to behold!

The crowds gathered to watch every game, all of which were played in the center of the studio either at lunch time or after work.

After the group stage, we had four group champions, all of whom progressing to the Quarter Finals, one of which won every single game.

Luke (Client Engineer), crushed his group with CSKA Moscow, leaving other players worried about the games to come.

The playoffs were breathtaking, with three games progressing into extra time and two going all the way to penalties. We learned very quickly that penalties were not a strong area of the Mediatonic FIFA players.

Some players felt the full force of defeat. Joseph (Junior Designer) had been strong in the groups, and started his playoff game with a three to zero lead at 50 minutes. Only for his opponent Nathan (Game Designer) to drag himself back into the game and ultimately knock Joseph out of the league altogether, in what would be a very significant win.

The group toppers were all back into action with the quarter finals and had to hold their nerve facing the playoff winners. Mark (Human Resources) managed to steam roll over Harry (Client Engineer), who had looked quite strong during the playoffs. Meanwhile, Nathan played post group favourite Luke. He took the game by just one goal.

I played Sam (Concept artist) in what I would describe as my most tense game of the league. Unfortunately I gave away a penalty in the last few minutes and thus Sam moved into the semi’s. Ross (Senior Engineer) had a shaky start to his game, but in the end managed to beat Tom (Producer) to earn his space in the semi final!

Each player was a bundle of nerves. All deserved to be there, but only two could get through to the final.

The first game was Mark versus Nathan in a tense 0-0 at half time. The second half saw a few goals but a number of missed opportunities. It ended 2-2, both goalies were on form and became known for their ‘wonder saves’.

In extra time, Nathan managed to sneak one past Mark’s defence to make it 3 - 2 and secure a place in The Final.

The second and last game of the semi finals saw Sam host Ross in a game of tactics. Ross looked shaky at first, missed placing passes and letting Sam attack freely. Ross held his cool though and grabbed a winner to face Nathan in The Final (cue the dramatic music). 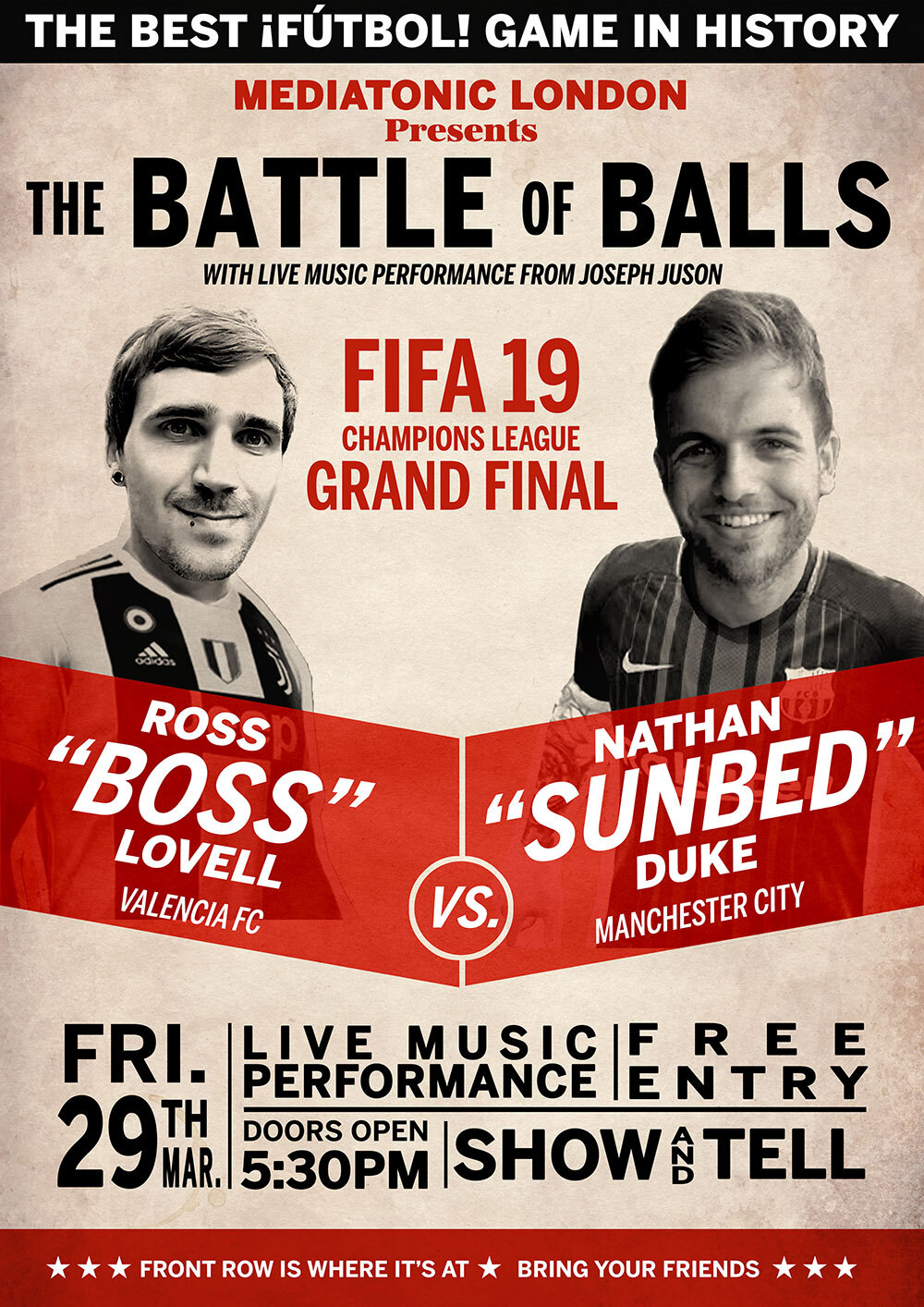 Richard (QA Associate) created this beautiful poster for the studio, yes the shirts are wrong, but we didn’t care!

It was the moment everyone was waiting for: the day has arrived. We took to the main foyer of Mediatonic, invited the entire company to watch.

Joseph returned, this time swapping his Xbox controller for a recorder, playing us the dulcet tones of the Champions league theme tune. I’ll let this picture describe the experience. 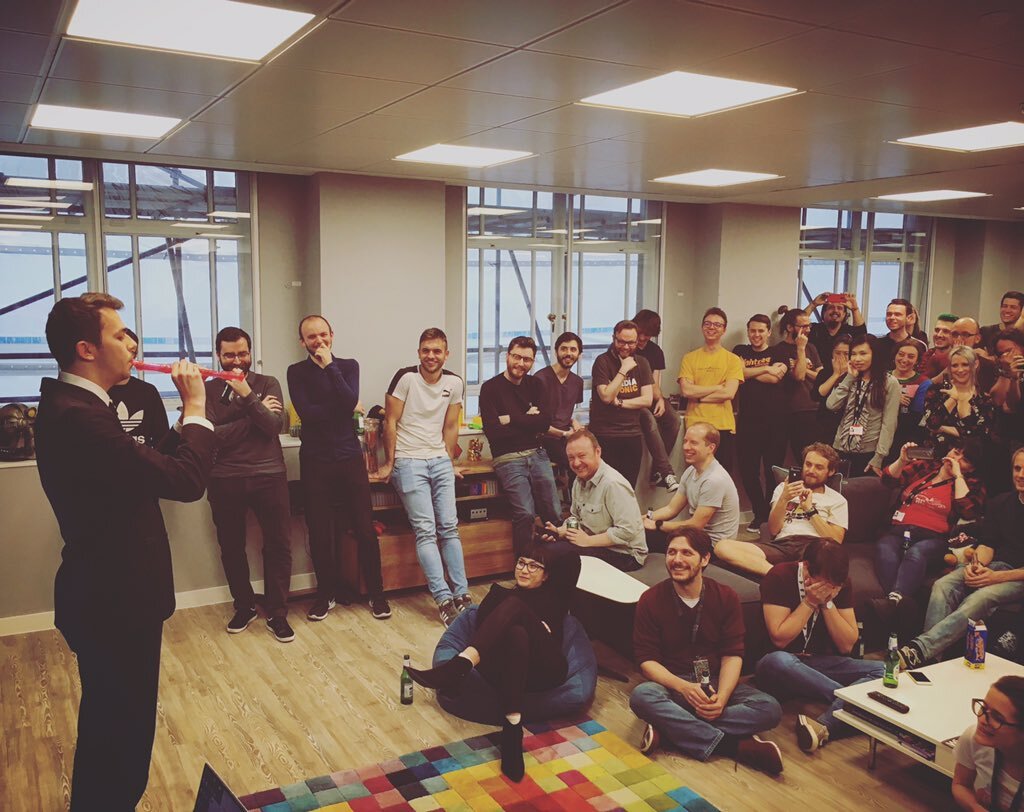 After the musical performance, both Ross and Nathan took their seats, controllers in hand, poised and ready.

They were playing for this: the Mediatonic Champions League Winners Trophy, which would sit proudly (and probably annoyingly, it’s rather large) on the winners desk, as a reminder of the greatest achievement of their career (maybe even life). 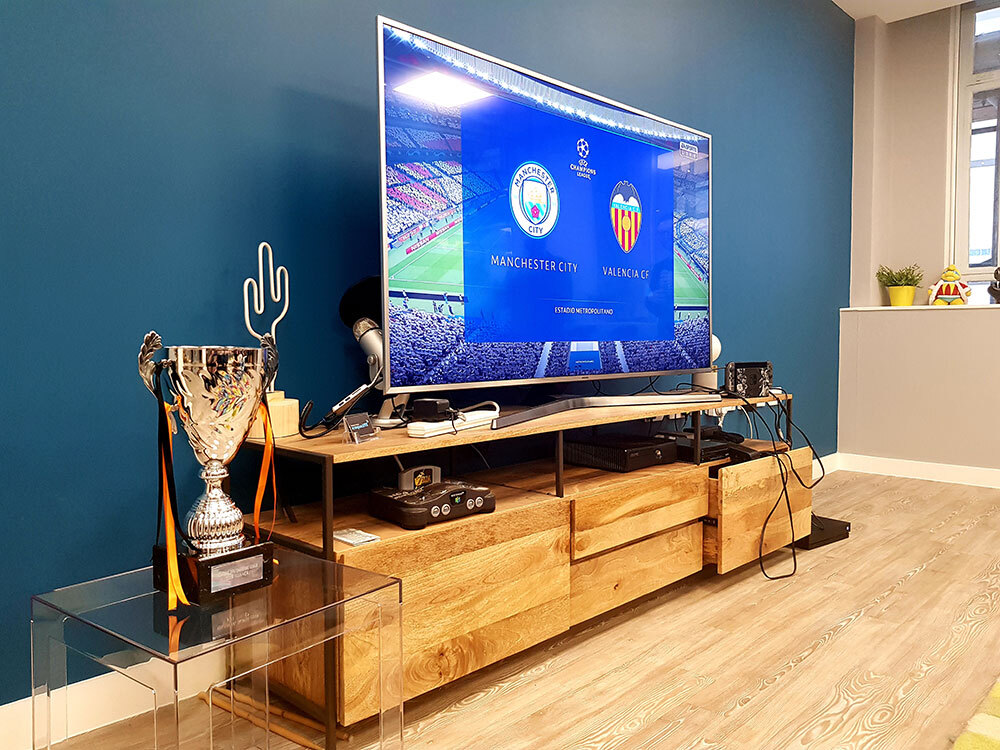 The stage was set. It was time to play.

Nathan came out of the tunnel, fired up and ready to win. Ross seemed a little more cool, calm and collected.

The first half of the game seemed open, with chances from both sides.

The second half saw the complete crumble of Ross’ Valencia side. When we caught up with Ross afterwards about this, he said:

"The team just seemed a little deflated in the locker room during halftime, maybe fatigue of playing so many games in such a small period of time, I just don’t know.”

Ross attempted to make some forward passes, with none of his players using the space. Slow and lethargic was the display. City, however, seemed up for the challenge and took their speed and experience into counter after counter.

Nathan netted two goals in the second half and even with Ross’ last 92nd minute attempt to score, the ball was cleared inches from going in.

The final whistle sounded, it was all over.

It was a long road. Many players had fallen along the way, from last minute goals, to shock defeats— it was the best league Mediatonic has ever seen.

But in the end, there can only be one Champion.