In the words of the incomparable Lady Gaga:

Okay, so "Fashion" was not her greatest lyrical moment.

Anyway, back when I was coming up with the basic setting for Murder by Numbers, I knew that I wanted the game to have a unique look. Visual novels can all look quite similar - background, two character portraits, textbox - but I wanted to make sure that, if you saw a screenshot of Murder by Numbers, you'd immediately be able to identify it. In other words, it had to be distinctive - while still fitting our constraints.

Around that time, I'd noticed friends of mine starting to wear double denim a lot more - that quintessential 90s look - and I was completely behind it. As a kid of the 90s myself, I have a huge amount of affection for the fashion atrocities we committed at that time. Ultra-clashing patterns, marabou bucket hats, the waistcoats! 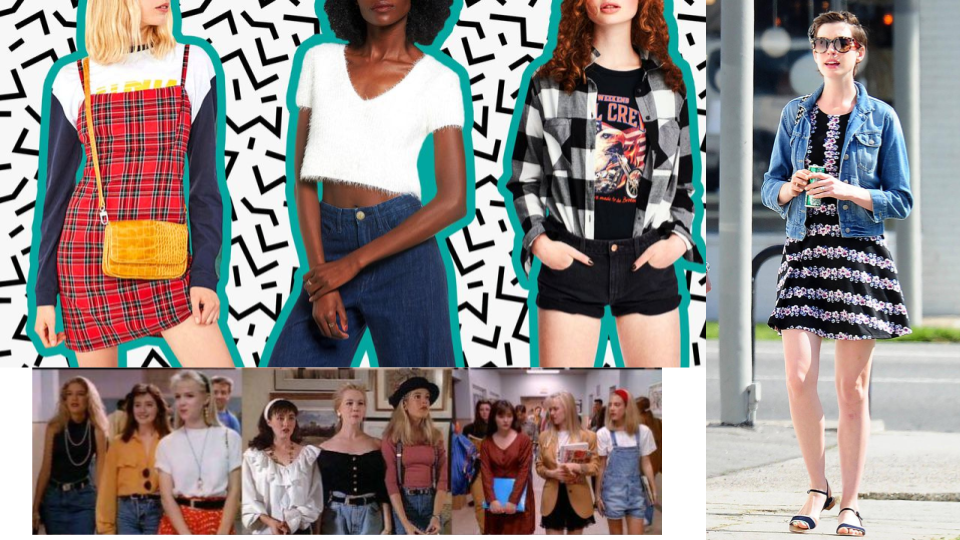 References started flooding my mind: Blossom! Clarissa Explains it All! Saved by the Bell! While the 80s has been getting a lot more exposure in games of late, it felt like the 90s wasn't getting its dues. But maybe that was changing? Maybe we could get ahead of the curve?

Two years on, I'm not entirely sure that curve ever came, but still: my mind was set. By leveraging 90s fashions we would have characters that would look like they couldn't have come from any other game. Plus, there was something nice about the 90s from a narrative standpoint too: the idea of setting an investigation time in an era before smartphones - before the world's knowledge was in the palm of your hand - appealed to me.

So, in my next meeting about the setting, I decided to float it. I expected a little pushback. 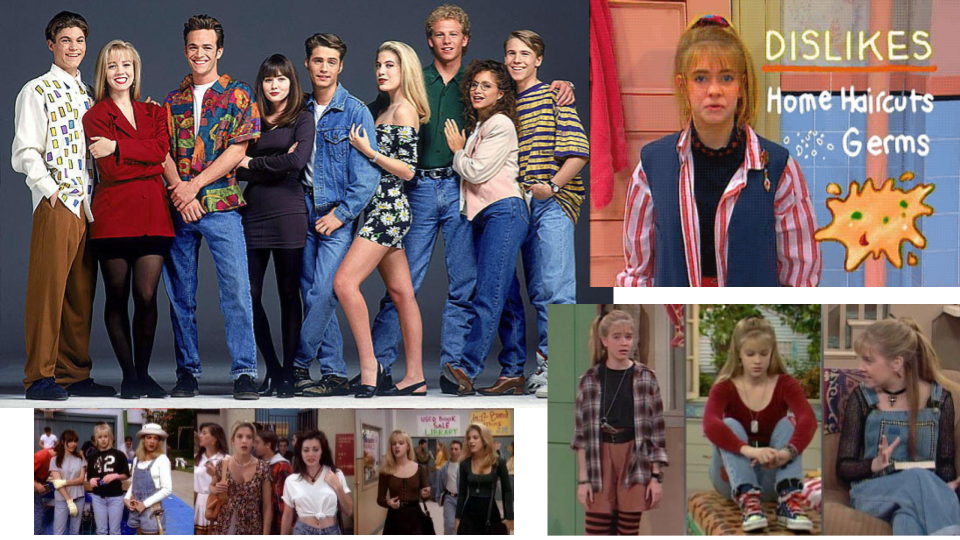 There was no pushback.

Buoyed, I started putting together a deck of reference imagery - a mood board, I guess. You've seen bits of it in this very article. The further down the rabbit hole I went, the further I fell. This was it! This was going to be awesome!

At this point in the development process, we didn't have a character designer on board. Eventually - and thankfully! - Moa said she'd be interested in taking part in the project. This was great news, but I worried slightly: will it be too hard for someone who grew up in Japan to understand the references we had for 90s fashion? Fashion is global, to a degree, but deep in the back of my mind I was wondering if all of our reference points didn't really translate well. Turns out I needn't have worried, as Moa threw herself into the task, watching the whole first season of Friends in two days (which came out in 1996 - the year we'd picked in which to set the game!). Talk about dedication! 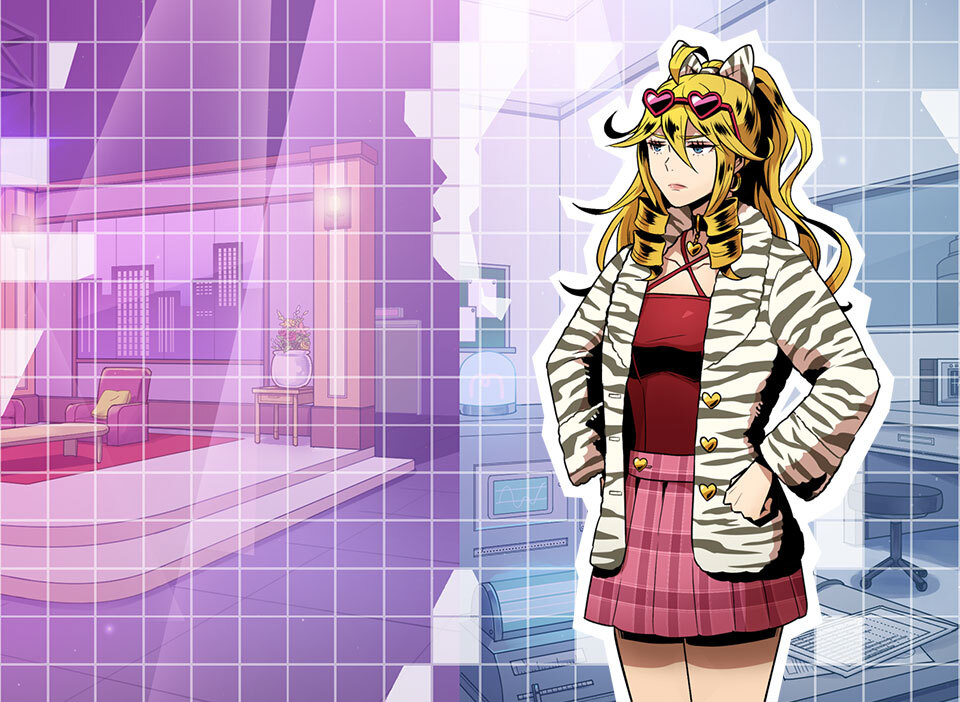 If I had to pick a favourite character's look, it'd have to be Becky. There's something iconic about that young Hollywood starlet look, and the whole idea of Becky was born from the countless pictures of Lindsay Lohan I'd see in Heat magazine, hungover, carrying a large Starbucks but somehow still looking chic. It's casual but also kind of dressy - and who doesn't like an animal print? In fact, we've already had two Mediatonic devs dress up as Becky at various parties, so I feel like we nailed that effortlessly fashionable look pretty well!

Oh, and seeing as I mentioned double denim, it'd be criminal if I didn't share some of the early designs of Honor which - of course - featured this most iconic of 90s fashions. While I dearly love the pink denim jacket, in the end I, with great sadness, thought that it was just too simple for a main character's look. But if you're wondering what Honor looks like on her days off detectiving, feast your eyes on this: 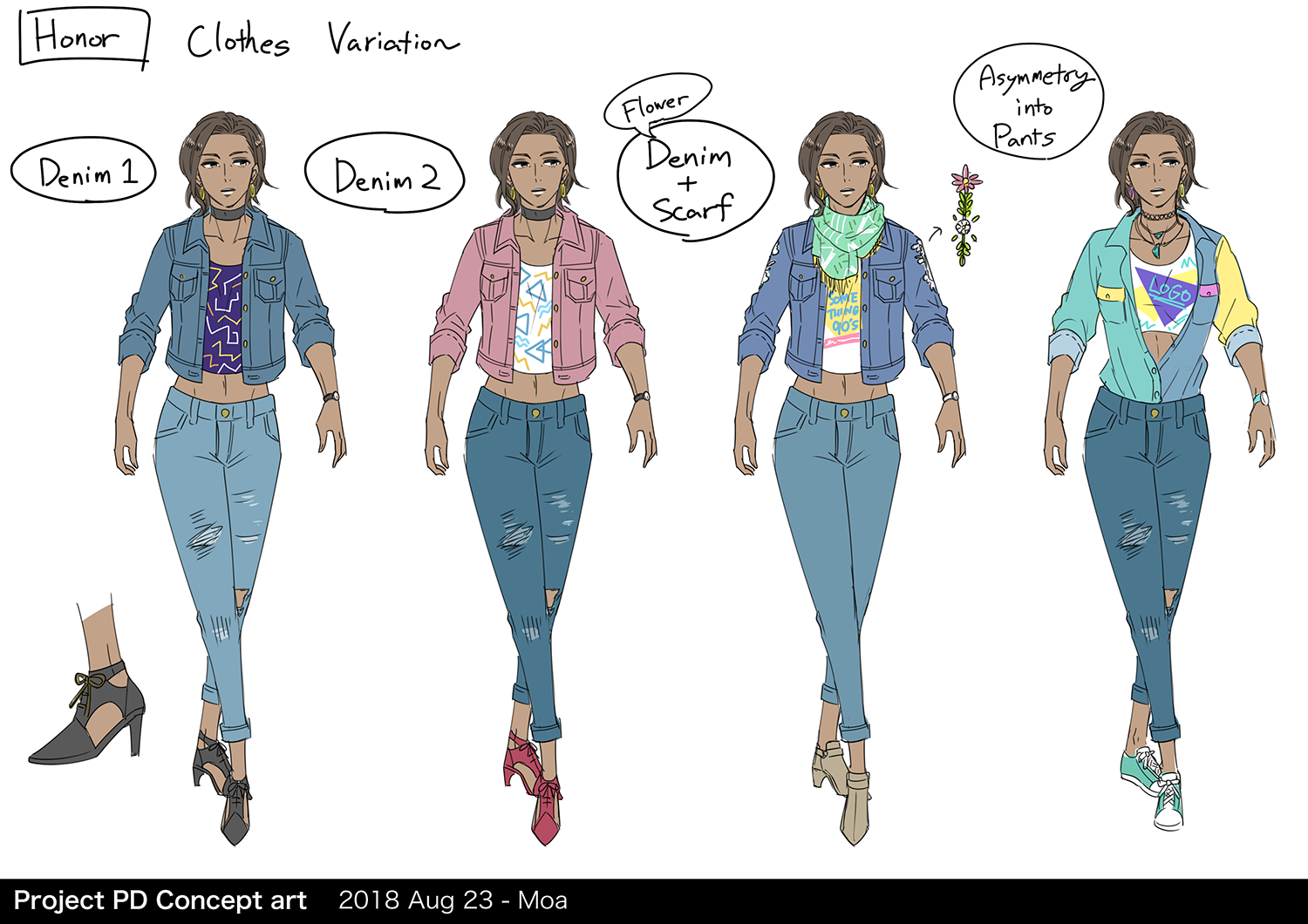