With Fall Guys Season 2 stumbling into the world, we’ve seen a whole host of medieval-themed shenanigans enter the Blunderdome, facing brave beans with new Rounds that are ripe for mischief and slimy failure! Two such creations have been challenging players with an all-new movable block mechanic, making for short-term alliances and opportunities for sabotage alike. We caught up with Game Designer, Ben Nizan, to find out about the brains behind the blocks, the Round design process and some insider tips for victory! 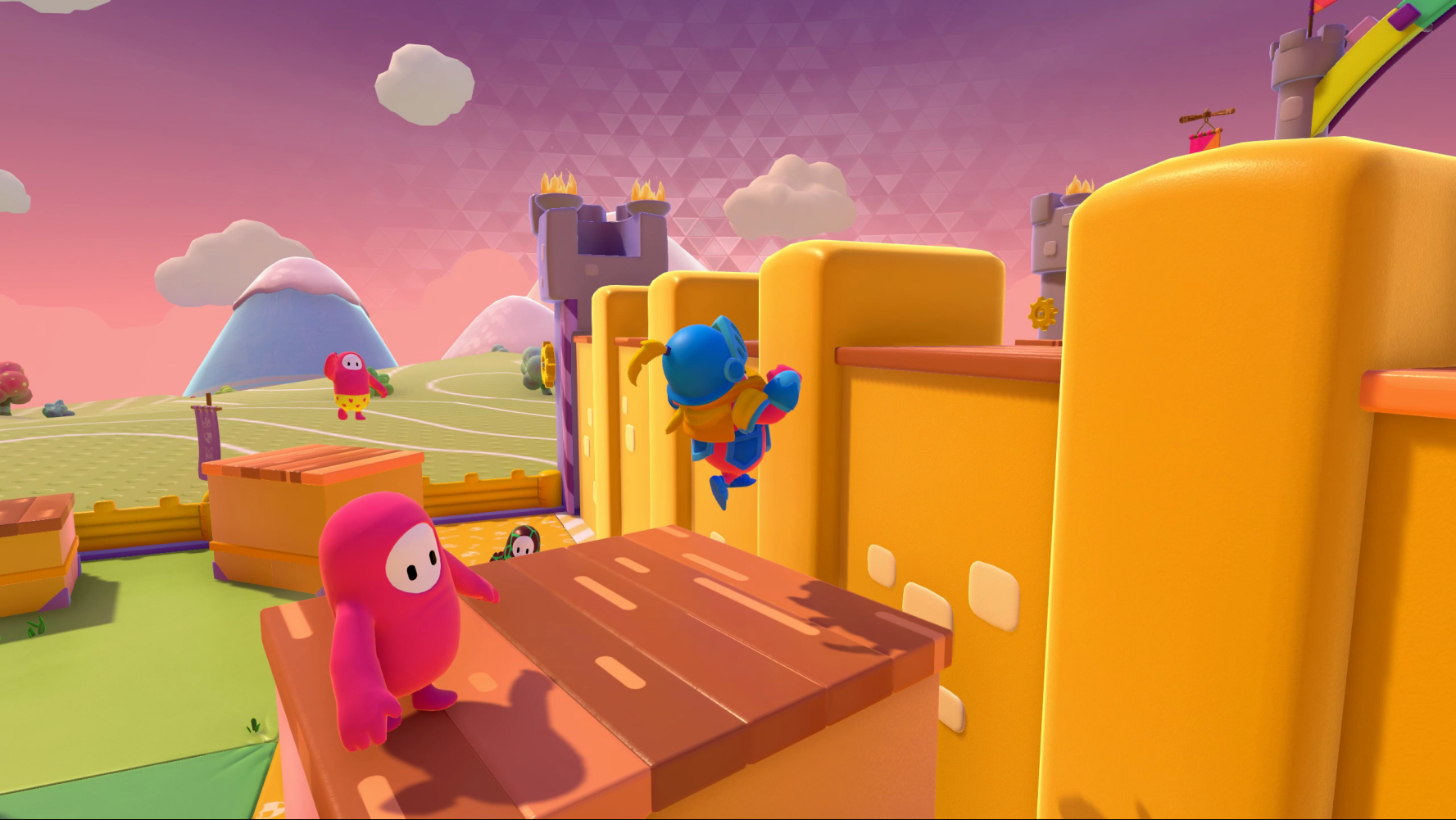 Wall Guys, as it looks today!

The ballad of Hoopsie Legends and Wall Guys

Wall Guys is actually one of our oldest level ideas, so fittingly for Season 2’s medieval theme it’s a real blast from the past. When Meg (Megan Ralph, Lead Level Designer) put the original pitch together, the wild potential of the Round and the moving blocks mechanic was abundantly clear. Though it’s fair to say we were equal parts excited and terrified looking at the first sketch from an implementation point of view!

At its heart, Wall Guys is a really simple concept, but one that’s technically challenging for a networked game. I put the first prototype together and I remember everyone was surprised it even worked at all. I mean...‘worked’ is probably doing a lot of heavy lifting in that sentence, but it was enough to prove to us that this was an idea definitely worth pursuing. 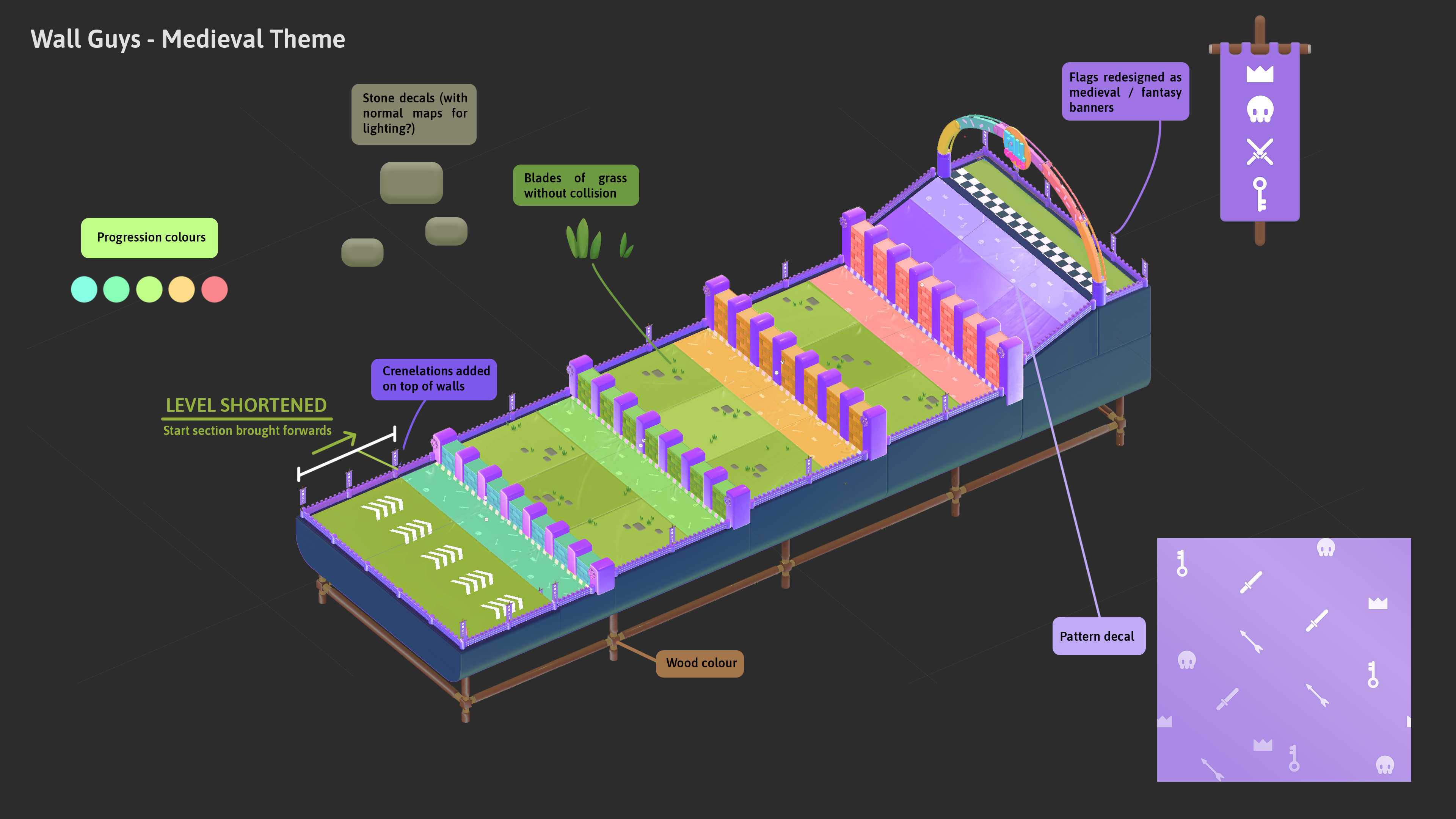 Originally we thought players would simply stack uniform-sized blocks to build structures that would enable them to get over the walls, but from the first prototype it became apparent that this was asking too much of a chaotic crowd of beans. So, we simplified it so that blocks were of different heights and could be climbed. To counter the effects of more...let’s say, mischievous players, Peps (Anthony Pepper, Senior Designer) added the concept of the walls lowering slowly over time. That way, if a particularly disruptive group of beans were making progress difficult, the scale of the challenge would slowly decrease. 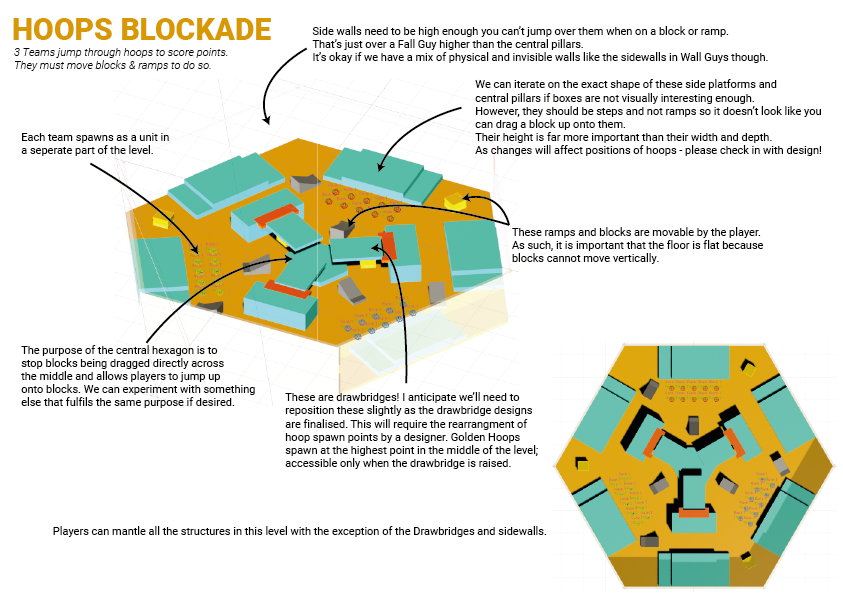 Concept work on what was to become Hoopsie Legends

Hoopsie Legends (The Round Formerly Known As Hoops Blockade) came later and was only pursued once we’d fully committed to the idea of movable blocks as a mechanic we could deliver on. I thought it’d be really cool to bring back the Hoops scoring mechanic that we had shown in Season 1’s Hoopsie Daisy and build on that foundation to create a level that plays out like some kind of acrobatic show! It felt like a cool fit for the medieval theme, with players moving themed props and jumping through the air in period costumes.

At first I felt this was going to be another Team Game as we anticipated players working together to move the blocks. Of course, if you’ve spent any time in the Blunderdome you’d know...that wasn’t likely! So, for the first time we decided to try out a points-based solo round! The blocks still add a really special dimension to the level, which really get to shine with the focus on solo victory. Essentially, it’s the See Saw Secret Sauce with some extra chillies thrown in.

As we witnessed in Season 1, impromptu alliances between players, while short lived, are super satisfying when they go right and playfully frustrating when they go wrong. As game designers, we strive to create emotions and oh boy, is there nothing more emotive than buddying up with someone to move a block only to push them off it. The betrayal is absolutely delicious. 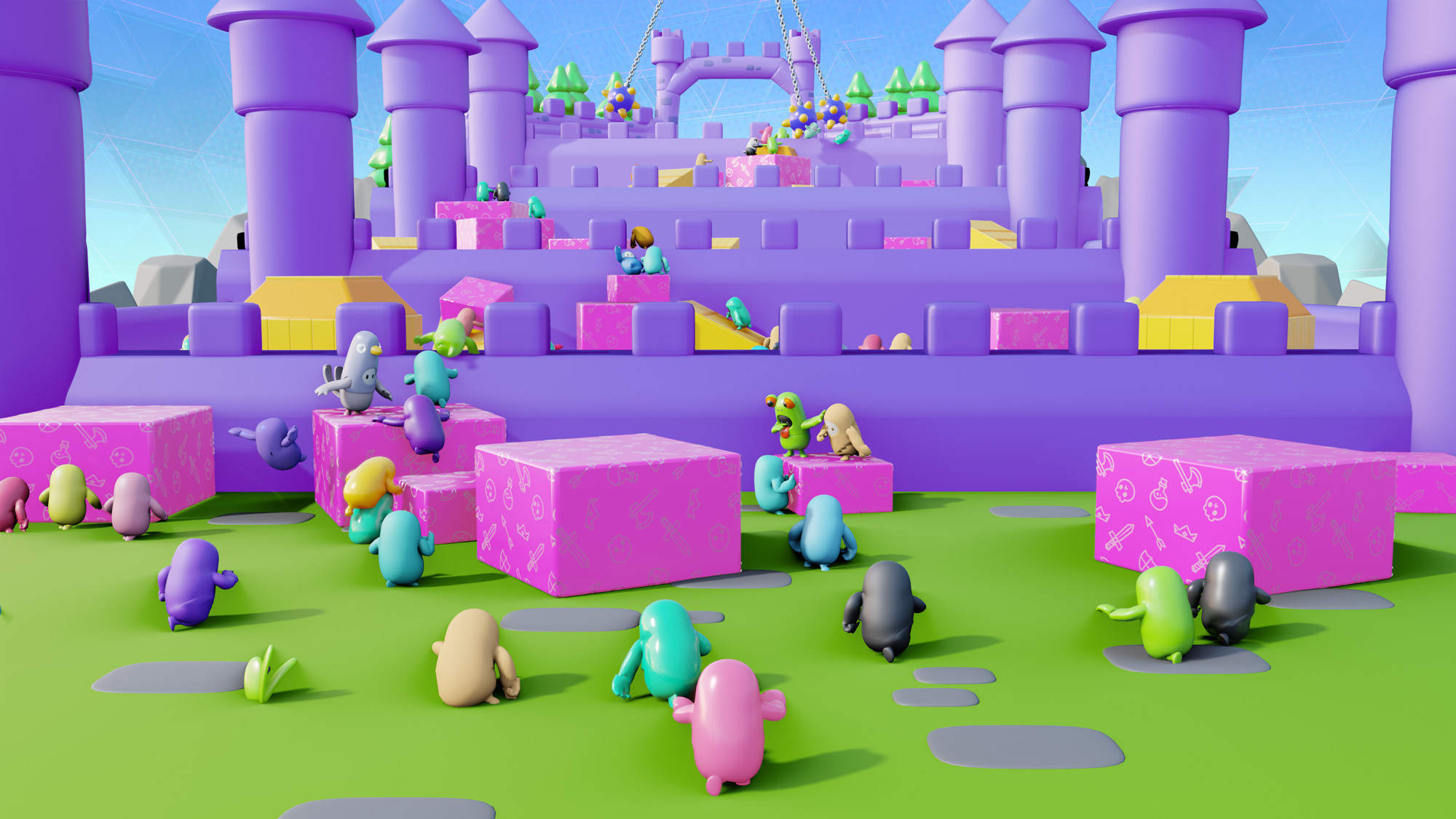 Of beans and blocks - how moving parts joyfully disrupt the Blunderdome

A really cool thing about the movable blocks and ramps in Season 2 is that they allow players to dynamically modify the environment they’re playing in. To literally grab the level itself and drag it around means the flow through the level is constantly changing. It’s exciting to work on because it means that change comes directly from the interactions between players and environment and isn’t defined by us. Player power!

What’s particularly special is that the movable blocks are physics based, so despite the fantasy world of the Blunderdome, they behave as you’d expect. If two players pull in opposite directions, the block won’t move. Likewise, if players pull in the same direction, it’ll move twice as fast. Ever tried to pull a block while loads of people are standing on it? Good luck with that..! The movable block physics create an amazing crucible for emergent and unexpected interactions that are quite unlike anything else in the game. Or many other games for that matter! 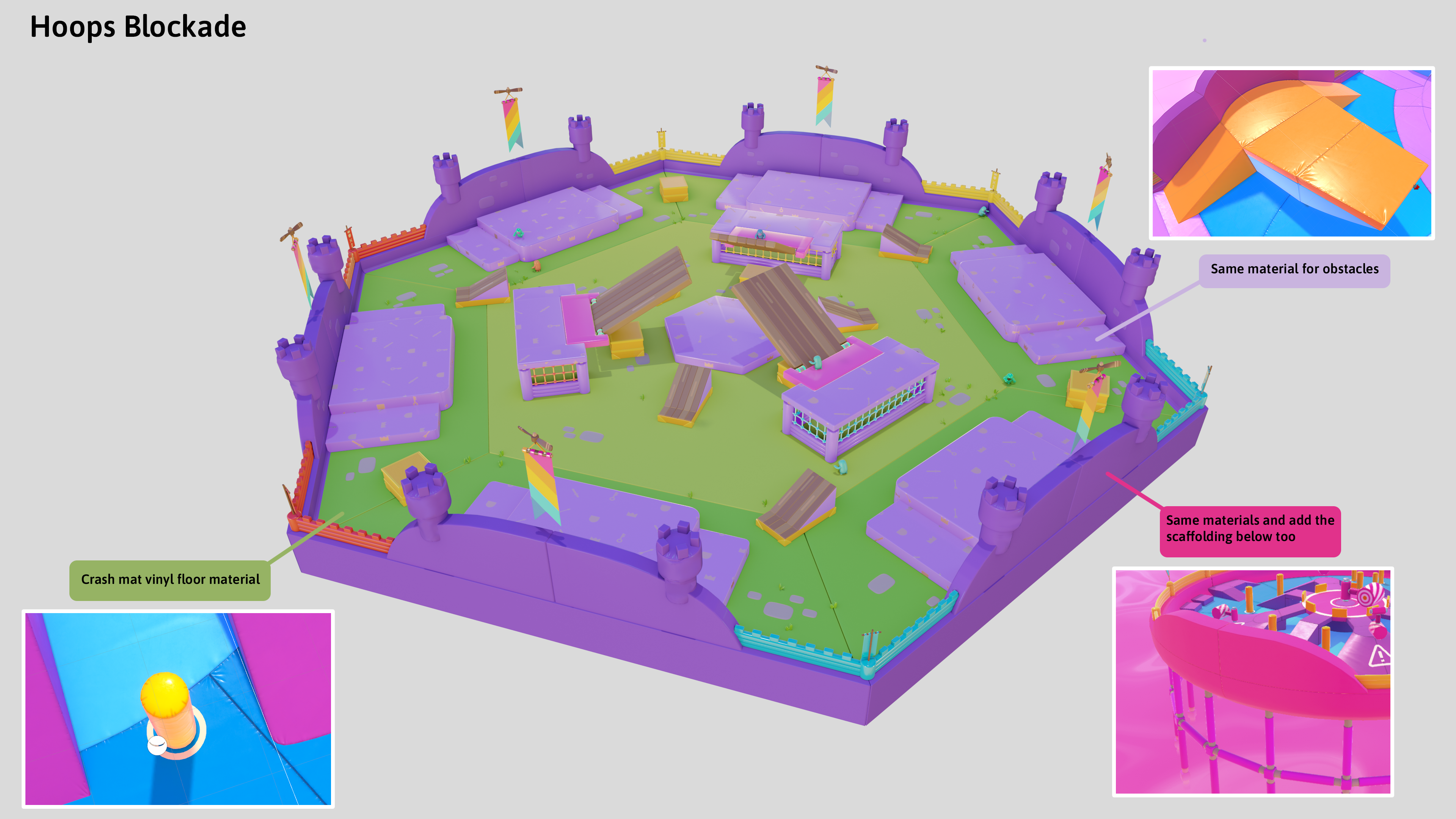 It’s fair to say that mechanically, the moving parts were a tricky thing to get working exactly as we’d like, which is why we held them back for Season 2. With 30~ players all able to grab and climb the blocks at the same time, it’s an awful lot for the game to manage. It did result in some amazing bugs though, like the blocks flying off into space with everyone attached! That probably won’t happen anymore. Hopefully.

Insider tips and the future of Fall Guys...

In Wall Guys, players share a goal of getting to the finish line, so you tend to see more short-lived alliances in that Round…though obviously, there’s always those that are laser-focused on their own success and will try to ruin things for everyone else (*cough* sorry not sorry). To up your chances of qualification, I’d definitely suggest that players try to informally work together. It may feel counter-productive at first, but it only takes a few dedicated players clubbing together on the stacks to outpace the lone wolves. Also, did you know you can grab ledges at the end of a jump-dive? Go for those action movie moments!

Meanwhile, Hoopsie Legends is a game of micro-goals that are always shifting and changing as new hoops spawn. This definitely favours the opportunists and is the total opposite of Wall Guys in that sense. For the chivalrous paladins; look out for hoops and blocks in empty parts of the arena and target those for undisputed points. For the wicked witches; keep an eye out for players who have just moved a block into place and steal their hoop before they’ve had a chance to climb up! And for those acrobatic jesters? I suggest climbing up onto the pillars and drawbridges as much as possible. That’s where the precious gold hoops tend to spawn. Plus, the falls are funnier! 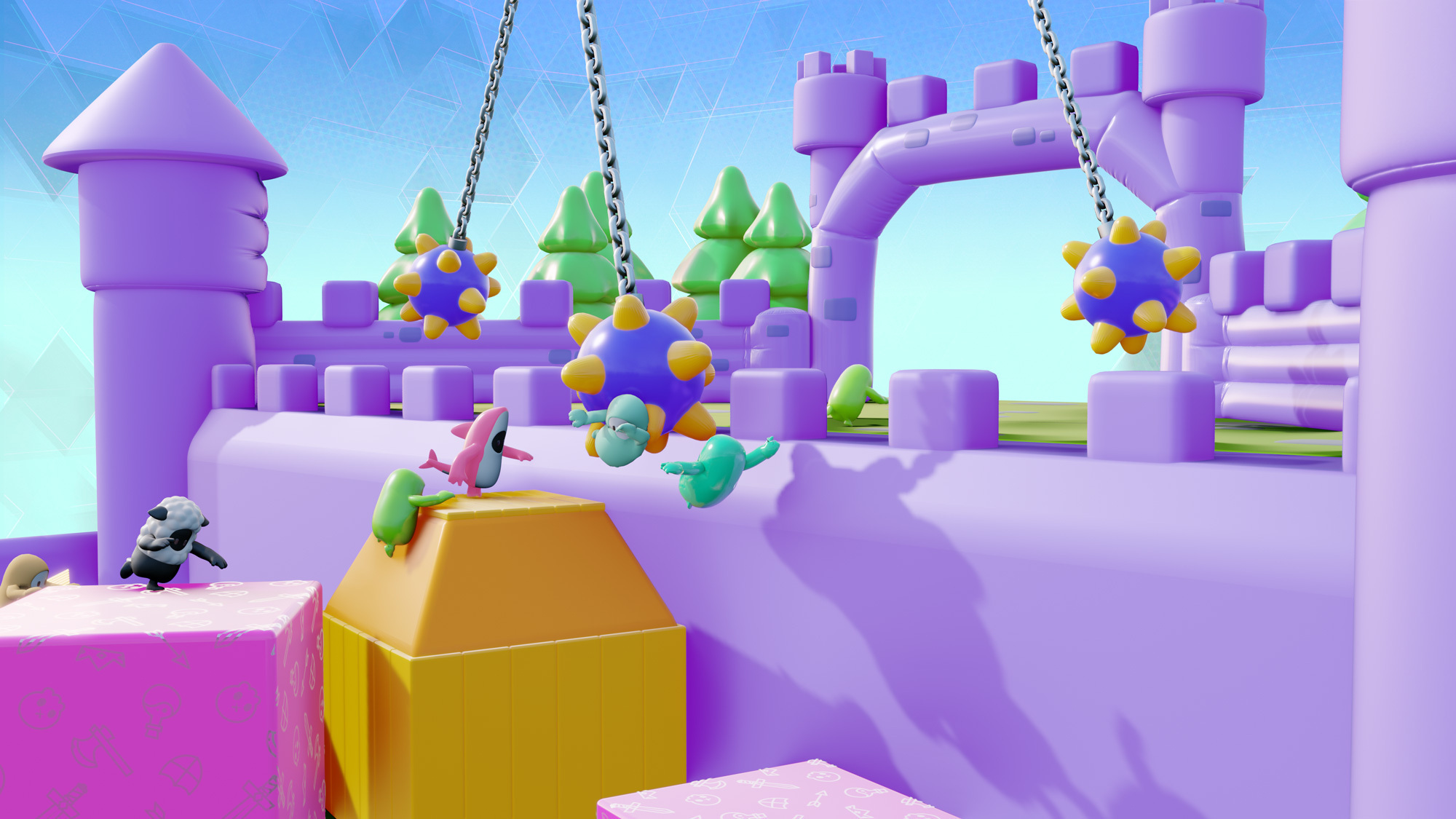 The design team are all really looking forward to seeing how people play with the movable blocks and it’s been exciting to see all the weird and wonderful ways the community are interacting with them in Season 2! I’m often keeping a keen ear out for community feedback so who knows, maybe we’ll be coming up with brand new rounds that use them in future? (Maybe we’ll combine them with See Saws? You’d love that...right?)

Fall Guys Season 2 is now live and ready for you to dive in on PS4 and Steam! You can read more about the medieval finery on offer in our announcement blog, including new Rounds, whimsical costumes and a slew of community-informed changes for smoother stumbles. Remember, you can keep up to date with all the Fall Guys news on our (extra spicy) Twitter account and join the discussion with the fine folk of the Fall Guys Discord server.